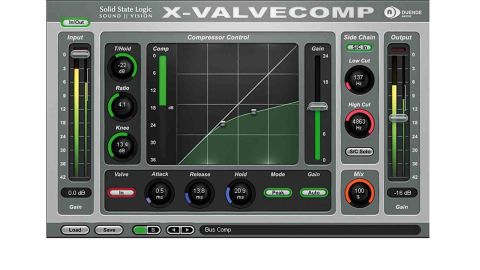 Three quality additions to the Duende Native roster, but note that X-Phase is more for phase correction than creative usage.

It's been a while since we've seen any new entries to the range, but now we have three to sink our teeth into: X-Saturator, X-ValveComp and X-Phase.

All three share the same features common to other X-series plugins - A/B comparison, onboard preset handling, input and output metering (peak and RMS), and integrated in/out bypass - although up close there are subtle visual differences between these three and the existing line. The release also marks a move to iLok 2 copy protection for the whole Duende Native line.

X-Saturator is, obviously, a saturation plugin, and it features four main sound-shaping controls: Drive, Harmonics, Depth and Shape. Drive controls how much saturation is applied, while Harmonics influences the type, shifting from odd harmonics at fully clockwise to a mixture of odd and even at fully anticlockwise.

Depth handles the overall level of the harmonics, while the Shape control adjusts the balance between them, tilting towards the lower or higher ones. The input/output gain and wet/dry mix can also be controlled, and the saturation level is influenced by the combination of Drive and Input levels, as you'd expect.

There's also a +6dB Headroom option, providing an extra 6dB of headroom above the saturation point. We found its behaviour somewhat program-dependent, transient-focussed sounds often sounding better without it and more legato sounds with.

X-Saturator sounds great, producing soft but audible saturation that works beautifully on electric bass, drums, electric piano and electronic beats. However, it's also possible to get X-Saturator to clip at extreme input levels, producing an undesirable distortion that's nothing like the sweet saturation it's clearly intended to deliver, so those input settings are important.

Next up, X-ValveComp is a compressor with optional valve saturation stage, sporting the same node-based interactive display as its older sibling X-Comp.

In addition to the regular Threshold, Ratio, Attack and Release controls, you get Knee shape, Hold, Peak and RMS sensing modes, manual and automatic gain Makeup, wet/dry mix and internal sidechain low-/high-cut filters. It's very easy to use, and although it's missing X-Comp's more esoteric 'bleed' options, the Valve setting adds an effective upper-mid enhancement.

In fact, the only real disappointment is that there's no external sidechain - very surprising in this day and age. Also slightly deflating, incidentally, is the paltry preset selection (there's only nine).

At £199, X-Phase is four times the price of the other two Duende Native newbies, so the assumption is that it must be pretty specialist - and, indeed, special. Essentially, it's an all-pass filter and delay, with manual control of filter response and delay time, the latter labelled in metres, feet, samples, milliseconds and seconds for intuitive interpretation.

It's designed to help you phase-shift a specific frequency range without influencing gain, primarily for aligning specific frequencies in multi-mic setups in order to reduce phase cancellations.

The plugin adjusts the phase around a single adjustable filter frequency, and the transition either side of this point back to a point of no phase change depends on the filter shape, of which two are available.

The first-order filter is a gentle shelving style; the second-order is the more powerful of the two with its adjustable Q factor, inverting the centre frequency phase, with an inverted phase transition above the centre frequency. At very high Q, sweeping the filter frequency produces ringing resonances. At broader settings and in first-order mode, though, things are much gentler and less focussed.

We tried X-Phase on a range of viable sources, including snare mics (top and bottom) and close and distant drum kit mics (overheads and room mics), and we can unequivocally say that it works very well. The display visualises not only the filter's frequency but its shape, helping you to understand what you're hearing.

Combining the filter and delay let us shift our drum kit overhead mics later in time, using the filter to retain punch within a certain frequency range, such as that of the snare or kick. Even at sharp Q settings, this sounded very natural.

In its stereo version, X-Phase enables both linked and separate control of left and right settings, and you can get quite interesting results by offsetting a specific frequency on just one channel - although that creative application alone certainly wouldn't justify the £199 pricetag, we should point out!

All three of these plugins make great additions to the Duende Native stable, broadening the remit of the family as a whole. X-Phase is a highly specialist tool aimed at those with phase issues to resolve, and although we found some creative uses for it, it's definitely best thought of as a problem solver rather than an 'effect'.

Conversely, X-Saturator and X-ValveComp are both creative plugins through and through. X-Saturator delivers everything from subtle edge to full-on fuzziness, and although not as flexible as a multiband design (like LVC-Audio HotPhuzz, for example), we really like its overall character. Finally, X-ValveComp successfully trades the complexities of X-Comp for a bit of valve flavour and a simpler interface.