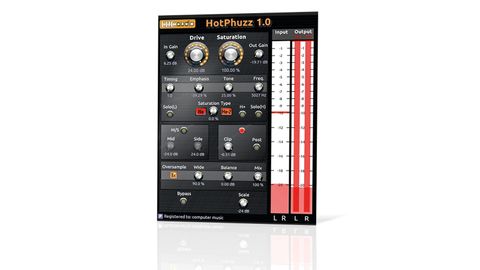 For valve and transformer saturation, HotPhuzz is a highly recommended and functionally unique bargain.

HotPhuzz is a dual-band saturation plugin (VST/AU/RTAS/AAX) that emulates valve and transformer circuits. It offers seven distinct sonic flavours, with the ability to run two algorithms at once and mix between them.

The dual-band aspect is handled via a crossover frequency control (Freq), with Emphasis and Tone knobs tilting the saturation and EQ respectively around the crossover point. For both, positive settings boost high-band and cut low-band processing, while negative settings do the opposite.

On top of that, the High Frequency Boost button (H+) boosts the mid to high frequencies by 1.5dB, while the Timing knob controls the saturation's onset envelope (attack and release). To make it easy to hear what's going on, the high and low bands can be soloed independently.

HotPhuzz's signal path involves several gain stages, including straightforward input and output gain, and automatic gain-compensating drive. The overall saturation level depends on both the Saturation and Drive controls, and a hard clipper with adjustable ceiling and position in the signal path (pre or post Out Gain) sits at the output stage.

It comes as no surprise that drums of all types make perfect fodder for HotPhuzz. We got good results enhancing just the high-mids and highs on a full kit balance, but individual sounds such as snares and kicks can also be processed successfully by fattening the low frequencies and/or enhancing the highs.

Each algorithm offers something slightly different to the others, with 'Ne' by far the harshest and 'Kr' the best for fat snares and kicks. Staying with drums, the Clip option in Post position delivers some great SSL listen mic-style limiter action, and tailoring the frequency balance with the crossover makes for a truly flexible effect.

For harmonically rich instruments such as piano, bass and guitar, we found it wise to steer clear of 'Ne', which is simply too fizzy. The key here lies in tilting the processing away from lower frequencies, where the distortion is more obvious. In this way, even piano can be dirtied up successfully, and processing just the higher frequencies is an effective tactic for enhancing vocals, particularly with the 'Ar' algorithm.

The Timing parameter has less impact than we expected, but we understand a wider parameter range may be worked into a future update. Also, although the Saturation Type blend control is a potentially significant feature, how audible its effect is depends on which algorithms you combine, and inevitably, blending in the most coloured (Ne) will have more impact than blending in the least coloured (Ar).

Other things we like include the algorithm-dependent colour-coded meters, which mix the colours of blended algorithms, and the very low CPU hit, even at 8x oversampling.

HotPhuzz generates both excellent 'warmth' and extreme fuzziness, but its forté is actually the creation of more subtle tones. Its well-realised dual-band design really helps you to enhance rather than destroy your sounds. At this price, it's also great value.