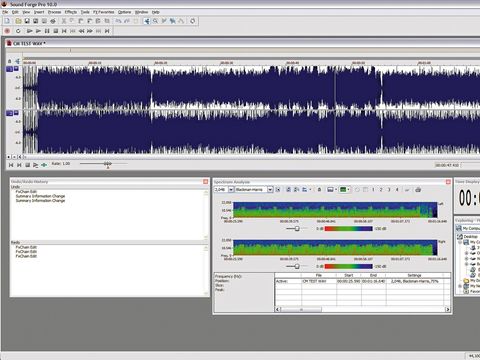 As with many of today's updates, this is more of a refinement than an overhaul, but Sound Forge remains a strong option.

Many readers will no doubt be familiar with Sound Forge, at least in name. From more humble beginnings back when it was a Sonic Foundry product to the brand new Sound Forge Pro 10 from Sony Creative Software, this audio editor has long been a staple of many studios and editing suites thanks to its straightforward layout and solid functionality.

In case you're unfamiliar, Sound Forge is a standalone app that enables you to perform all the usual audio editing operations (cut, paste, trim, normalise, etc), add effects/fades, resample, record and even restore audio files, all through an intuitive interface. SF10 supports pretty much any audio file format, working at up to 64-bit/192kHz resolution, and it can host both DirectX and VST plug-ins, all while offering full Windows 7 compatibility - it's certainly what you'd call comprehensive.

Firing up SF10, it looks and feels almost identical to the preceding version, which is actually reassuring. The menus and windows work in the same way, making experienced users feel instantly at home.

Going a bit deeper, it's evident that some niggles have been addressed: working with multiple files in v9 led to a baffling mess due to the use of Windows' clunky multiple document interface, but they now appear neatly tabbed along the base of the work area.

Sticking with the visuals, there are plenty of View menu options for customising the main work area to your heart's content, and everything seems to dock together more neatly than before. Something we wish Sony had addressed this time, however, is that navigating the FX Favourites can be slow - if, like us, you have a multitude of plug-ins installed, the menu takes a very, very long time to scroll all the way to the bottom, which can be a pain.

Previous versions of Sound Forge included the Sony Time Stretch effect, which gave mixed results, often suffering from nasty flanging side effects. SF10 boasts the addition of zplane's tried-and-tested élastique Pro timestretching and pitchshifting plug-in. It does exactly what you'd hope, changing the pitch and/or time of your musical source with minimal artifacts. And if you just want to convert from one sample rate to another, the new iZotope 64-bit SRC function will do this for you with no discernible artifacts.

SF10 contains over 40 effects and still comes with the Noise Reduction 2 package, which is a helpful set of tools for restoring poor-quality recordings. New effects include a Resonant Filter plug-in (which is exactly what you'd expect) and the iZotope Mastering Effects Bundle 2.

It's no surprise, then, that the processors offer great quality and are thoroughly suitable for the majority of mastering situations. Though featuring slightly different GUIs and fewer features than the Ozone 4 modules (the absent MBIT+ dithering is actually included in the main Sound Forge Process menu), they're certainly from the same stock and yield extremely similar results when loaded into an Ozone-esque plug-in chain.

If you don't already have Ozone 4, the Mastering Effects Bundle 2 could be a compelling reason to snap up SF10 - the only downer is that you can't use the plug-ins outside Sound Forge.

As in previous versions, there are plenty of automation and batch processing functions for alleviating the tedium of carrying out repetitive tasks. Although SF10 is ideal for editing standard stereo format audio files, it also supports multi-channel editing/recording and boasts Dolby AC3/surround sound support, not to mention all-new direct editing of individual samples in GigaStudio/Sampler and SF2 instrument formats.

Also on the editing front, the new event-based editing system makes working with multiple audio events in a single window child's play, and becomes indispensable when fading together files or arranging audio into tracks for CD.

Not content with making audio editing look easy, burning audio CDs is also a doddle, with a new disc-at-once (DAO) burning option and CD-Text functionality included. It's a little basic but handy for chucking files onto CD without the hassle of firing up a separate burning app.

Another improvement is the replacement of the simplistic file properties editor with the more comprehensive Metadata editor, enabling you to tag each file with relevant information - vital when mastering for CD and using CD-Text. For those who need greater CD-burning functionality, Sony's CD Architect 5.2 is also included, giving you access to Red Book specification audio CD burning and being spot-on for producing pre-masters for replication. It's dead easy, with drag-and-drop ordering of files, and it enables you to be as specific as you like regarding the layout and configuration of your disc.

SF10 also has a genuinely useful Help menu and interactive tutorials, with the boxed version including a voucher for video training tutorials, all of which are great for audio editing novices.

If you're in need of an audio editing suite, or you're dissatisfied with mastering/editing inside your sequencer, we heartily recommend SF10. However, existing users who own the already well apportioned version 9 will need to consider whether the revisions to SF10 make this upgrade worthwhile.

Listen to some of the things that Sound Forge 10 can do: