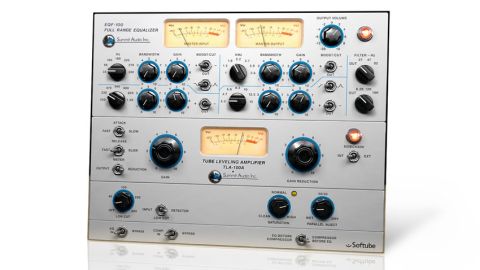 Softube flex their analogue emulation muscles with this great bundle.

Summit Audio is a US manufacturer producing high-spec analogue valve gear - a staple of pro studios for over two decades now. Happily, it's given Softube the go-ahead to create official software plug-in versions of its awesome boxes.

The Grand Channel (VST/AU/ RTAS/AAX) is a bundle of three Summit-modelling plug-ins: the TLA-100 compressor, the EQF-100 EQ and the Grand Channel itself, which combines the first two in one device.

The hardware EQF-100 is a 4-band passive valve equaliser, and Softube's model precisely follows that format, adding nothing more than a pair of very clear input and output VU meters and an output volume knob.

Our first observation is that it looks superb on-screen, with a relief and shadowing that makes it appear extremely realistic and very similar to the hardware unit. The four bands each offer a choice of seven centre frequencies - the two mid bands are, of course, bell curves, while the top and bottom band are switchable between shelving and bell curve.

Each band has a three-way cut/boost/bypass switch, and an accompanying Gain control sets the amount of cut or boost. It's numbered 0-10 but isn't linear: from 0 to 5 only represents about 3dB of cut or boost, 6dB is at about 7.5, and there's a massive 10dB hike between 9 and 10.

The bandwidth control is marked from 0 (narrow) to 10 (broad). Annoyingly, the default setting of the latter is 0 - it would be better set at 5. A pair of high and low filters complete the tonal controls, each with three cutoff frequency options.

The output volume, along with the input and output VU meters, enables you to match in and out levels if you're doing a lot of boosting, thereby controlling the distortion level.

The EQF-100 isn't surgical; it's a character EQ used for the warmth of its bottom end and smoothness of its top. It's much subtler than a surgical EQ, especially around the 'presence' range, where you won't hear the typical edginess, just a 'bringing forward' in the mix.

We've already looked at the TLA-100 in back in March (when it scored an impressive four and a half stars), and suffice to say it's a classic valve emulation that delivers supremely transparent compression as a levelling amplifier.

It's particularly well suited to vocals, and so easy to use: a few attack and release time options and a big 'gain reduction' knob with which to set the amount of compression.

Some additions bring it into the 21st Century, though: a high-pass filter can be applied to the input or sidechain, the Parallel Inject knob mixes between compressed and dry signals, and the Saturation control overdrives the output.

Finally, the Grand Channel simply brings the EQF-100 and TLA-100 together in one plug-in, although you can bypass either independently to save CPU. The only other addition is a routing switch to flip the order of compressor and EQ.

The two individual plug-ins combine perfectly in the Grand Channel to create a first- choice channel strip plug-in that makes just about anything sound better. You might sometimes need to substitute precision EQ or a faster compressor, particularly for drums, but for general mixing duties, you can't really go wrong with this as your workhorse.