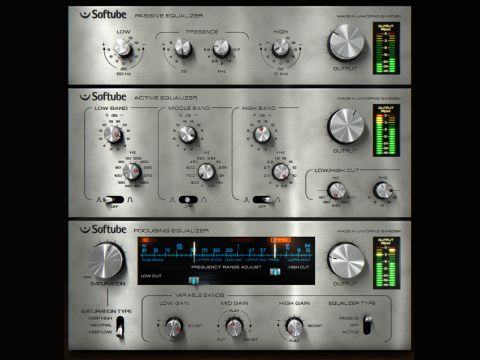 Softube has served up three wonderful examples of just how good modern analogue-modelling plug-ins can be.

Swedish software designers Softube made their mark a couple of years ago with Vintage Amp Room, a guitar amp modelling plug-in. Since then, it's applied its DSP mastery to various designs, including the Abbey Road Brilliance Pack.

The Passive-Active Pack continues on the EQ tip, containing three plug-ins, each with a specific angle. One is based on active circuitry (modelled on the Filtek Labo Mk5 desk EQ) and one on a passive design (modelled on the Neumann PEV 930 desk EQ). The third, Focusing Equalizer, combines both circuitry types in a variable frequency design.

It may seem a little odd releasing a three-plug-in bundle when you could simply combine all options in one interface. Softube is upfront about this, saying that it aimed to recreate not just the sound but also the simplicity of classic analogue designs.

This certainly applies to the Passive and Active Equalizers. The former is the simplest, with three bands: low shelf, high shelf and mid-range presence. The two shelves are fixed (60Hz and 10kHz) and the mid-range offers seven fixed frequencies (700Hz to 5.6kHz). Both shelves have stepped 3dB cut and boost, with the presence boost only in 2dB gradations.

The Active Equalizer is more flexible, offering three slightly overlapping parametric bands and high- and low-cut filters (18dB/octave). Once again, the controls adjust the gain in steps (2dB this time), with up to 16dB boost or cut. To round things off, each parametric band has two Q settings: sharp and wide.

The Focusing Equalizer is more complex and can operate in either passive or active mode (based on the same modelled units). However, the three bands work differently. The upper and lower shelving bands are boost-only, with cut or boost for the mid-range. These work in conjunction with the high- and low-cut filters, and moving the cutoff points of these actually affects the EQ frequencies of the three bands. The plug-in is rounded off with a three-flavour variable saturation control.

The Passive EQ has a real point-and-shoot simplicity to it. We found this particularly effective on acoustic guitar, with boosts on the low and high bands scooping out the mids. In typical passive style, you'll also find that there's interplay between the bands, and a sharpening Q on the presence band as you reach maximum boost.

Obviously, it's no good for surgical tasks, but it's a great choice for sweetening your masters or making broad tonal changes.

The Active EQ sounds completely different, emphasising the difference in the underlying (virtual) circuits. The dual Q options per band enable much more accurate EQing, and with 16dB to play with, we were easily able to completely reshape some test drum loops. The narrow Q option gives particularly sharp results and is great for adding punch to lifeless kicks and snares.

This plug-in temporarily indicates currently selected values above the meters - something that the Passive EQ doesn't do. Finally, you'll find that if you boost like frequencies using two different bands, you won't get a crazy doubling up of gain, and this helps keep overloads at bay.

With the same underlying passive and active algorithms as the other plug-ins, the Focusing Equalizer's point of interest has to be its variable frequency system. Softube advises you to use the high/low-cut filter sliders to set upper and lower limits for your sound, and this in turn dictates where the EQ bands operate - as you narrow the range, the low/mid/high bands move to target that area.

The sound of the cut filters also follows the global active/passive setting, with the passive ones being much gentler (6dB/octave) than those of the active mode. The 'sliding' display (which looks just like an old-school radio tuner) depicts only the cutoff frequencies here - there are no other frequency indicators, and with no markings on the controls and no feedback above the meters, you really have to rely on your ears. Indeed, to further investigate, we even loaded up a frequency analyser.

In practice, however, we found it best to treat these units like old-school hardware, tweaking until the sound is good, rather than obsessing over frequency values. Used in this way, the Focusing EQ offers all the flavour of the other two plug-ins, with greater flexibility.

Its saturation effect is also a winner, with the Keep Low and Keep High settings helping you avoid damage to low and high frequencies. It's only a shame that there's no saturation bypass switch, for easy A/B comparison.

Overall, the Passive-Active Pack is a great piece of work from Softube, designed with vision but also with full regard for the sound of some pretty rare kit. What's more, the price tag is considerably more modest than comparable top-flight analogue emulations.

Listen to the Passive-Active Pack at work on the following instruments:

3. Acoustic guitar: using the Focusing EQ firstly in passive mode setting the high-pass filter then EQing low, high and mid bands. Next, switching to off and then to active mode and back again for comparison. Next, dialling in saturation first in neutral then 'keep high' then 'keep low' modes and back again. Finally, using the filters and EQ to make a radio'd effect.

4. Drum loop: using the Focusing EQ in active mode first setting high- and low-pass filters then EQing all three bands. Next, adding in plenty of saturation in 'keep high' mode then switching to 'keep low' mode and back again for comparison. Bypass completely for comparison.