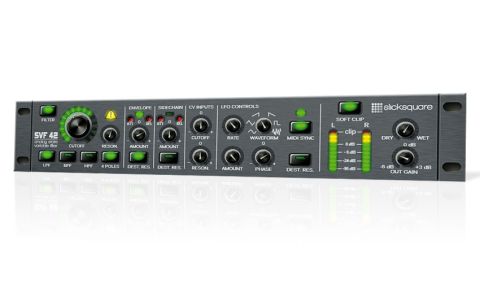 This is a flying start for Slicksquare and a righteous gem of a filter for the rest of us at a great price.

A component-modeled plugin effect (VST) inspired by the Akai MFC42, SVF-42 is the debut release from Swiss newcomers Slicksquare.

A multimode filter (high-, low- and band-pass), switchable between 12dB and 24dB/octave roll- off slopes and with a cutoff range of 16Hz to 16kHz, its headline feature is an intuitive-yet-deep modulation setup.

The three primary modulation sources comprise an envelope follower, a sidechain input and an LFO, each routable to the filter cutoff or resonance. The follower and sidechain feature Attack and Release controls (tiny screwhead rotaries that would benefit from some sort of value indicator) and bipolar depth settings. The stereo LFO is the highlight, though, featuring phase shift between the left and right channels for panning japes, host tempo sync and six waveshapes including S&H.

The cutoff and resonance can also be modulated via Slicksquare's proprietary VirtualCV system. This converts VST automation data sent to the CV Cut and Reso In targets to a virtual "analogue CV" signal, via a modeled amp-based CV stage, the mod depth of which can be adjusted postively or negatively, making for a cool alternative to conventional automation (which is also on tap for both parameters, of course).

To make visual sense of all that signal wobbling, the LED ring around the cutoff knob animates to show its modulated setting - we're not sure why resonance doesn't get the same. At the end of the line, a modeled soft clipper and dry/wet mix control offer optional limiting and parallel processing.

SVF-42 perfectly captures the spirit of the MFC42, Electrix Filter Factory and other "hands-on" analogue filters of their ilk, being huge fun to use and almost impossible to not get good results from. Most importantly, it sounds absolutely superb - seductively fluid, whip-crack sharp at high resonance settings and ear-warmingly analogue.

The modulation system might appear quite simple in terms of individual elements, but bring them all together and truly intricate rhythms are the order of the day. It's a monster on drum loops in particular, imbuing them with energy, heat and groove.

If we were to nitpick, we wish we could point each mod source at the cutoff and resonance simultaneously, each with its own polarity and depth controls (or even have two banks of modulators, one dedicated to each), but as it stands, this is a flying start for Slicksquare and a righteous gem of a filter for the rest of us at a great price.