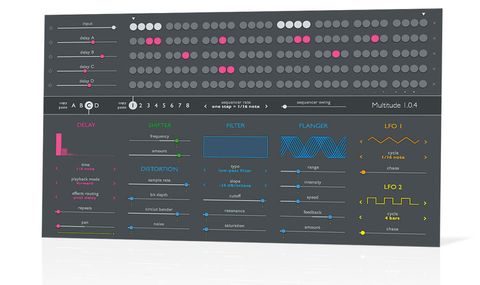 In a world of me-too plugins, Sinevibes' idiosyncratic range of creative Audio Units effects are a breath of fresh air for Mac users, and the latest, Multitude, is its most ambitious to date.

It's a tempo-synced delay comprising four independent delay lines (A, B, C and D). Each line can be run in forward or reverse mode, with settings for delay time, feedback (Repeats) and pan, and its own bank of effects: filter, flanger, distortion and frequency shifter.

As well as that little lot, each line also plays host to two discrete LFOs, which can be applied to simultaneously modulate almost all of the effects parameters, plus the delay pan and main delay level, each with its own modulation depth setting. Phew!

This already absurdly powerful design is then added to with that Sinevibes staple: a step sequencer, here with one lane for the dry signal and four for the delay lines. It cycles through up to 32 steps, and the Rate ranges from a quarter-note to 1/24 per step.

Rounding things off are eight pattern memories and a global Sequencer Swing control. What it actually sequences is a gate on each lane, essentially, with each active step opening a send from the dry signal into that delay line.

So, to achieve a continuous feed into a delay line, as per a regular delay, you simply draw in a continuous pattern through the whole sequence. You can also program a gating pattern for the dry signal, although this doesn't influence the delay sends in any way.

Once you get you head around the underlying concept, Multitude is stunningly simple to use, and the clean, no-nonsense interface is fluid and precise. With four delays and so many parameters to tweak, it's good to find a decent library of presets onboard, named to indicate the number of delay lines used.

Presets aside, Multitude is clearly a tweaker's plugin. If you "override" the sequencer by filling in all five rows (just click the X at the end of each one), then it's all about mixing delay times, applying effects processing and choosing forward or backward delay mode.

Bring the sequencer into play, though, and things get more precise, enabling you to fire off tiny send "shots" and process them very accurately, which makes the delay lines feel sort of like samplers. Of course, how this works depends largely on the nature of the source material, but for getting the most out of the sequencer, more sustained sounds are generally the way to go.

The final processing layer comes from the two LFOs, which can have a massive impact on the sound of each delay line thanks to the sheer number of targets on offer. We should also mention the Chaos setting, which randomises the LFO output, adding an organic touch.

On the wishlist, a randomiser would be a nice addition, and unsynced operation could be useful. The lack of parameter scale indicators on any of the controls is a bit disconcerting at times, and adjusting the tiny orange and yellow modulation depth sliders requires a steady mouse hand - but these are small gripes in the grand scheme of things. We understand that several additional features are on the cards for the next update, but even as it currently stands, Multitude is a magnificent plugin.