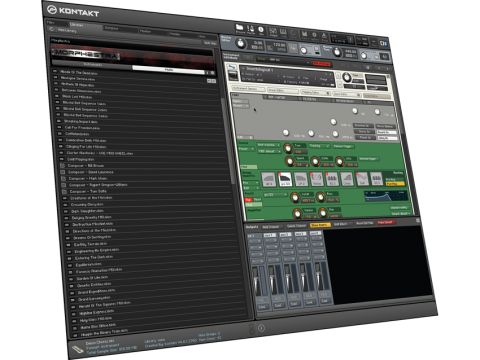 Inspirational and instantly 'visual', there's something here for everyone. Morphestra gets two thumbs up.

Sample Logic's Morphestra is a sound library of cinematic textures, rhythms and atmospheres.

If you think about the nature of modern movie and television soundtracks several things spring instantly to mind: the sound-designed layers of creepy textures for horror movies; the driving rhythms for chase sequences; and the deep percussive hits and exotic wind instruments which underscore scenes from far-flung destinations. These are all just as much a part of the fabric of modern scoring as the more traditionally 'musical' elements of an orchestral or synthesised soundtrack.

Morphestra is designed to provide you with just such an array of otherworldly noises to create atmosphere, which should make it an essential choice for anyone working in this field or with aspirations to do so.

First things first - the all-important install. Large sound libraries almost always arrive on multiple DVDs, giving us time to kill as we feed one DVD in after another. So imagine our surprise and delight to discover that Morphestra arrives on a compact 160GB Glyph hard drive, ready to connect up and go. This certainly sweetens that price quite a bit, given that the library uses 27GB of the drive, leaving 133GB for your own use.

The library runs through NI's Kontakt sampler or the free-to-download Kontakt Player; Simply press click on the Add Library tab in the top left hand corner of Kontakt's GUI and point the browser at the Morphestra Library on your Glyph. You're then automatically routed online to NI's Service Centre, where you can enter your serial number to authorise. Easy. If you don't want to travel everywhere with Morphestra's precious Glyph drive, you can simply copy the Library across to your hard drive of choice before activation.

All of which means that rather than the hours installing and authorising you'll be up and running in less than five minutes. A highly promising start.

Ease of install would be worth nothing unless the library was worth having and fortunately, this is where excitement ramps up another few notches: Morphestra is phenomenal.

"The whole library is effortlessly and excitingly playable, as the raw sample content is impressively enhanced by the Kontakt engine."

At their best, libraries shouldn't simply provide you with what you're expecting but should offer genuine surprises too, and this one delivers in spades. Sounds are organised into two categories, namely Instruments and Multis, which are pretty self-explanatory. Instruments are single sounds, while Multis are combinations of several Instruments which are usually stacked up via the same MIDI channel, producing pre-mixed multi-timbral layers of sound, on which more later.

The Instruments are sorted into folders by 'type', with categories such as Blurred Emotions, Dark 'n' Scary, Nature and Sci-Fi, which makes narrowing your search straightforward. Within any folder, you'll then find a list of instruments that load into your version of Kontakt ready to play.

There simply isn't space to describe the wide variety of sounds on offer but there's a staggering array, from organic textures derived from instrumental recordings through to synthetic textures and tempo-sync'd rhythmic loops and much, much more. The whole library is effortlessly and excitingly playable, as the raw sample content is impressively enhanced by the Kontakt engine.

The Multi content stacks several Instruments together and usually presents them mapped to a single MIDI channel, meaning that lots of sounds trigger at once. Often, zones are mapped to present you with key-specific layers with, for instance, a series of tempo-based loops in the middle, some ethereal textures at the top and some weighty booms towards the bottom.

These Multis are nothing short of inspirational - our only warning is that firing up a random Multi will often lose hours of your life. We lost count of the number of times we 'checked' a Multi during this review before guiltily returning to our words an hour and several track ideas later.

The Multis have been developed mostly by Sample Logic itself but some heavyweight endorsement lies in wait too, as there are artist patches from several Hollywood luminaries including Rupert Gregson-Williams, Tom Salta and Mark Isham, to name but three.

The library's intelligent use of controllers such as the modulation wheel really comes to the fore through the Multis, as you'll find that, by pushing the wheel up, several Instruments suddenly leap forth with extra brightness or resonance, making these hugely dynamic instruments.

One of the main advantages of running a library through a plug-in host like Kontakt is the fact that you're free to shape its sounds however you choose. Loading a single instrument presents you with a pane with controls with high- and low-pass filters, attack and release dials and six buttons to activate effects including Distortion, Reverb and Delay to get you started.

Below this main tab, four additional ones lie in wait to let you set up the Arpeggiator/Gater module, the Filter/EQ settings, the Reverb/Delay parameters and any separate FX tweaks you want to make.

All of which gives you 40 controllable parameters, even if you're just using the free Kontakt Player. If you're an owner of Kontakt, you can go much further, and this library then becomes even more of a creative playground.

Morphestra's success is in its variety. Its sound sources have come from diverse fields including orchestral sampling, vocal recording, field recording and rhythmic looping which, once run through some serious processing, creates a library with such a broad range of layers it's a sound-designer's dream.

Simply put, there's something here for everyone, so while this isn't the cheapest library you'll ever come across, we do think that the quality of the sounds on offer, the ease of use and that big drive justify the expense. Now, if you'll excuse me, we've got another hour of 'happy time' to lose.

Listen to a selection of Morphestra's presets being played: