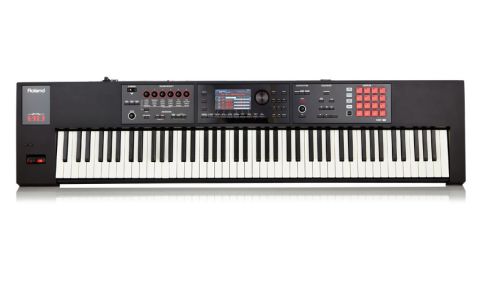 The FA is a versatile workstation that's a serious and keener-priced alternative to the Krome and MOXF.

Every week keyboard nerds discuss the supposed upcoming demise of the workstation concept but you only have to look at how many workstations are currently in production to ascertain that the genre is still healthy. The FA name first appeared in 2002 with the Fantom FA-76 workstation and now it's back but with all traces of the Fantom word erased. We hear that legal issues over ownership required its removal. Yes, even mis-spelled with an 'F'...

So the new FA series, a set of boards that comprise the 06 and 08 models, which share the exact same functionality but with 61-note synth action and 88-note weighted keybed options respectively.

The FA-08 (reviewed here) is still nicely portable for an 88-note weighted board and the whole package weighs in at just 36lbs which is manageable for one person, though this is without a flightcase. It boots from cold in just eight seconds and the overall look is clean and utilitarian (if a little '90s looking) with a mixture of tough textured plastic for the body and shiny black perspex for the control surfaces.

The buttons/cursors have a solid feel, whilst the onboard dials (used for parameter tweaking) feel good but slightly less rugged and exhibit a little wobble.

Ergonomically, the front panel is simple and flows well but, with no touchscreen, there's a heavy reliance on the jog wheel and cursors for most editing tasks. However, the Shift button is a godsend on the FA as it shortcuts you to key editing parameters without having to scroll through loads of pages.

Thankfully, the wheel and cursors are within easy reach of the keyboard, so you can have both hands on deck and turn the jog wheel by reaching out with one finger, though it would have been nice to have the 'sound modify' dials within closer reach too.

The colour screen lies at the heart of the FA-08 and it certainly has the wow factor initially, though, as it has to convey a lot of information in certain modes (especially when editing sequences), it sometimes feels a little cramped and some of the smaller fonts can be hard to read.

It's still way better than the screen on the Jupiter-50 and the Yamaha MOXF but the Korg Krome's larger full-colour touchscreen is still the best in class.

As noted earlier, the FA-08 has an 88-note weighted keybed. The keys are a comfy size and are nicely textured, though it takes a bit of time to get used to this particular 'Ivory G' action, as it demands a good bit of initial pressure to get the keys moving.

In addition, the key return is sluggish and spongy which impacts when trying to play fast riffs/ parts on organ, clav or synth leads, so you'll likely need to adapt your technique a little, though changing the velocity curve to 'light' helps.

Our advice is, if you mainly play synth type parts, then grab the 06 instead, though some pianists love heavier actions and the 08 might be ideal. Unfortunately, there's no aftertouch on either FA model except via control pedal, (which kind of defeats the object!) and we think the £457 price difference between the 06 and 08 is a little steep, though of course the street price will be less.

Programming sounds on the FA is pretty intuitive and, though the interface/edit screens are simpler than on the new Jupiter's and Integra, it doesn't feel like too much has been lost. In many ways, the FA-08's more direct interface trumps its more expensive siblings and, especially, the new 'sound modifying' dials and 6x4 parameter matrix (which can access up to 24 different parameters on the fly) speed things up considerably.

Importantly, all the dials operate smoothly with good resolution (unlike the stepped controls on the MOXF) so smooth parameter changes are possible. Within the four rows of dials, three of the rows are hardwired to factory set parameters (filter controls, envelopes, FX, EQ etc) and one row can be assigned to user chosen parameters (including DAW control).

Under the screen there are ten dual-category instrument select buttons and you can set up favourites (10 banks x 9) for quick recall during live shows or when recording. Further to this, splits and dual layer sounds are only a button press away.

Each Tone can have its own multi-effect and arpeggiator, plus each Studio Set of Tones has access to separate compression, chorus, reverb and EQ (per part), all controllable from the sound modifying dials.

As with the Integra 7, the only slight downside is that polyphony is limited to 128 notes, so if you go crazy layering several multi-partial Tones expect a little voice stealing, though you can use 'voice reserve' to ensure that your main sound is exempt from voice stealing. Still, there's plenty of power here to make massive orchestral, acoustic or synth layers - the FA is a seriously deep synth.

To further extend the FA's sound palette, you can also download sounds for free from Roland's Axial website. There are two virtual SRX slots available onboard into which you can load newly downloaded SRX sounds and all the sounds reside on an SD card (up to 32GB in size, 4GB card included as standard) so sounds can be swapped in and out easily and dragged and dropped from your computer via USB.

Whilst we are talking about computers, the DAW Control button enables you to quickly map the front panel dials, transport controls and sample pads to your DAW of choice using the built-in DAW templates (all major DAWs are included). There's currently no editor available but the FA is very easy to edit as a self-contained unit, though it would be nice to be able to edit the sequencer from your computer in particular.

Sonically, the FA sounds very similar to the Integra 7, which is no surprise as the FA is essentially an Integra 7 but with fewer sounds onboard (around 2,000 on the FA vs 6,000 on the I7), fewer virtual expansion slots, no 'motional surround' and fewer outputs.

The Supernatural acoustic pianos and electric pianos are classy (and it's great that you can tweak string/key off resonance, hammer noise and more) plus the electric basses, strings, woodwinds and acoustic guitars are up there with the I7 and Jupiter-50/80 (ie excellent)!

The Supernatural synth engine is very powerful and punchy and, though it lacks all the modelled filter types from the new Jupiter's, with just a little programming you can dial in most classic/contemporary sounds with little effort, including searing analogue leads, 'supersaw' trance patches, huge basses, warm and inviting polysynth comp sounds, sound FX and more.

Let's not forget that there's a whole Supernatural/ PCM drum section too and the synth PCM wave section contains a 'best of' selection from Roland's classic boxes/ boards of yesteryear (such as the D-50, XV-5080 and TR-808/909).

The only small letdown is that the tonewheel organ model still lacks a dedicated chorus/vibrato unit and, although the drawbars appear on screen, it's criminal that they don't map to the sound modifying dials, which would really bring the organ sounds to life. We hope this can be rectified in an update, as it's not much fun scrolling through and tweaking drawbars with buttons and the jog wheel!

Regardless, our money is on the FA-06 becoming the most popular FA model, especially when you consider its power and portability and that it features Roland's flagship Integra 7 sounds. The fact that it doubles as a USB Audio/MIDI interface with sequencer and sampler is a huge bonus, plus it's priced very reasonably too.

We're also glad that Roland are using an SD card for sound storage as you'll never run out of space for sounds/samples (just buy a new card) and the sound expansions via the website ensure it will stay sonically relevant far into the future.

The biggest letdown is that you can't use sounds that you've sampled as partials/oscillators in your Tones (the MOXF can do this) but this aside, the FA series covers most bases admirably. Above all, it's deep enough to keep even hardcore programmers occupied, yet it remains intuitive and sounds great.