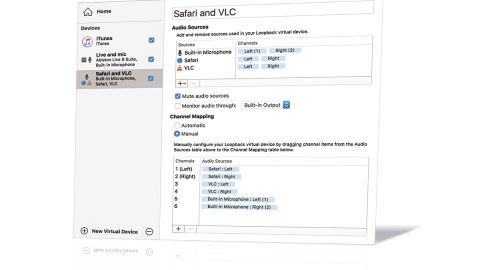 A neat tool for musicians, producers and podcasters alike.

Having bowed out of its involvement in developing Soundflower (an open source kernel extension for OS X), Rogue Amoeba has released its own, more comprehensive application for routing audio between Mac applications in the shape of Loopback.

In simple terms, Loopback is used to create and maintain a list of virtual audio devices that are employed as input source drivers in any Core Audio application - most pertinently, your DAW.

At the most basic level, it operates as a straightforward pass-through device, so you could, say, sample a voice conversation by setting Loopback as the output in Skype and the input in your DAW.

However, the flexibility of the system becomes apparent when you start to assign specific apps to virtual devices. To elaborate on the previous example, by creating a custom device with Skype, iTunes and an audio interface input assigned as sources, then selecting it as your DAW input, you can record your phone call, iTunes output and guitar at the same time.

Applications can be assigned to channels within a device, too, which are then made individually available as inputs in the receiving mixer, just like the physical inputs on a multichannel audio interface.

You can also elect whether or not to have the output of sources in a device muted when that device is being used - ie, for monitoring through your DAW - while the 'Monitor audio through' option lets you monitor the output of a device through any connected hardware output.

Although Loopback has been designed with podcasters mostly in mind, the benefits to the computer musician of being able to easily capture audio from their web browser, media player, VOIP apps and any other potential creative sampling source on their Mac are obvious.

While the essence of its functionality can be largely paralleled using the free Soundflower (now back under the wing of original developer Matt Ingalls and still available), Rogue Amoeba's user-friendly app certainly makes the process much easier and more enjoyable, and adds in numerous extras.

Our only issue with it, then, has to be the rather high price, which, sadly but understandably, is going to put a lot of potential users off.