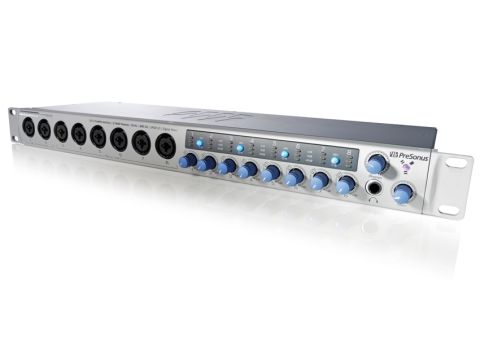 There's not much to grumble about here - this is another fine addition to PreSonus' FireStudio range.

On the face of it, it's a slimmed-down version of the FireStudio, so what do you get for your cash? Essentially, a 10-in/10-out, 24-bit/96kHz FireWire interface with MIDI and zero-latency monitoring.

Eight of these inputs are equipped with PreSonus' Class A XMAX mic pres, with the remaining pair being via the rear-panel S/PDIF. The front panel inputs give you patch bay-style access, and the first two inputs also double as high-impedance instrument input jacks.

On the back panel, these two also have pre-converter balanced insert points on TRS jacks. Neatly, the insert return also acts as a standard-impedance line level input, should you prefer not to use inputs 1 or 2 for an instrument.

Input gain is on notched knobs and the accompanying LED meters are basic but do enough to confirm you have a signal and tell you whether it's clipping the converters. Phantom power is dealt with in pairs, with front-mounted switches saving you some back-panel fiddling.

Simplicity is a virtue, and the FP is right on the money in this respect. The included FireControl software is easy to get to grips with, and mixer defaults mean that all the inputs are routed back to the outs, so all you have to do is activate the mixer that corresponds to your desired outputs, and you'll get zero-latency monitoring.

We found there was plenty of gain for most situations, although the maximum 50dB of mic gain might be an issue if you plug in a passive ribbon mic.

In tests, both the mic pre and output sounds were clean and clear and, importantly, the unit behaved itself on our Mac setup.

One thing that wasn't clear from the outset is that you can't use FireWire bus power to run the unit, so truly mobile recording isn't an option. Also, although the routing system is excellent, there are no further DSP goodies in here.

This product is less complex than the FireStudio, making it a simpler and potentially less flexible unit. However, if you don't need ADAT connections or the optional MSR remote, then it's also much more affordable.

What's more, PreSonus has kept all the useful recording-related stuff in place - quality mic pres, analogue insert points and balanced connections. And with Cubase LE, BFD Lite and various other apps in the box, this package is hard to fault.