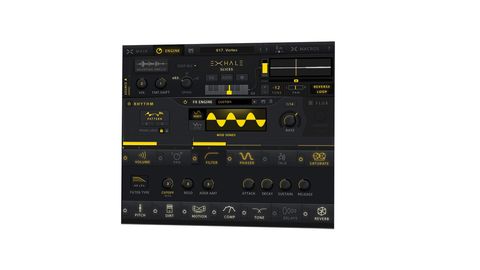 As a genuinely inspirational vocal-based 'synth' for dance, electronic, ambient and soundtrack production, it's a breath of fresh air.

Boldly proclaiming itself "the world's first truly modern vocal engine", Exhale sets itself up for a fall before it's even been installed.

You're probably imagining some elaborate 'next gen Vocaloid'-type arrangement that pushes Kontakt scripting to its limits, opening up a world of solo vocal design based on an immense library of words and phonemes, right? Well... no.

What we have here is a very well-conceived and good-looking but in no way revolutionary scripted Kontakt instrument built to do fairly conventional things to a diverse 9GB library of non-lyrical human voice samples, both solo and ensemble-based.

Think 'vocals' in the most abstract sense, and you're in the right space.

The many recordings in Exhale's 9GB soundbank are used in three distinct playback engine modes, each with its own bank of presets - 500 in total, complete with tag-based filtering.

Note mode maps two independent sounds, chosen from a list of one-shots, sustained "pads" and tempo-synced loops, across the keyboard; Loop mode gives you 40 banks of 13 tempo-synced loops each; and Slices mode lets you play one of 40 phrases, each sliced across 13 notes for REX file-style triggering. Controls such as envelopes, sample start point, Reverse and Formant Shift round out this top Source section.

The Main screen houses four Macro sliders, each assignable to up to six parameters from across the instrument. Every one of Exhale's presets makes good use of them, so you could potentially get your money's worth without ever going any further than the front page.

While the marketing might be meaningless hyperbole, Exhale is, thankfully, superb.