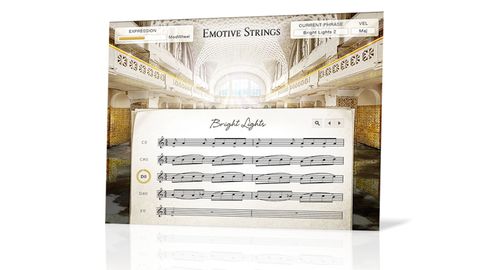 An instrument built to give the media composer immediate results and sound superb doing it.

A direct counterpart to Action Strings, Native Instruments' Emotive Strings runs in the same interface but uses sampled legato phrases and arpeggios to deliver instantly usable dramatic and/or emotional string section parts, rather than the high-octane sounds of its predecessor.

Up to ten keyswitchable phrases from the 175-strong library (28GB) can be brought together in a Theme, and 75 preset Themes (of five phrases each) are included.

By keyswitching between the component phrases of the loaded Theme with the left hand, and playing notes and chords with the right, even the least melodically-minded of producers will astound themselves with the authentic, deep and undeniably emotive string parts they're suddenly making.

Emotive Strings adds to the straightforward Single Pitch and Melodic phrase types of Action Strings with the rather more elaborate Emotives and Arpeggios.

Emotives are a collection of legato phrases and ending notes for playing in real-time or programming to create custom lines and melodies. Input a chord with your left hand (the green keys) and the notes of that scale alone are made available for triggering and playback (the blue keys), each pitching the phrase but keeping it in the same mode (minor or major) as the chord.

Low-velocity notes trigger descending phrases, while high-velocity ones play ascending phrases (dynamics and intensity for all Phrase types are controlled using the mod wheel or Expression slider in the GUI, rather than velocity). The Arpeggios, meanwhile, are played using minor and major chords, naturally and in their first and second inversions.

Opened at the bottom of the GUI, the Sound tab is home to a couple of preset EQ settings, Close or Stage mic options, and the Normal or Wide Stereo Image switch, plus a choice of ten uneditable convolution reverb presets.

The Playback tab enables tempo doubling/halving, adjustment of the release time when playback stops, and volume levelling of the phrase-to-phrase transition samples.

As with Action Strings, Emotive Strings' lack of mixing functionality is notable by its absence, particularly given the price - we should at least have independent level control over the two mic channels, rather than having to choose one or the other. But in terms of ease of use and sounds, it's every bit as effective as its stablemate.