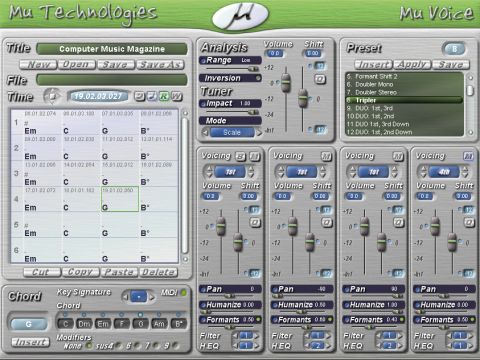 There's not much that Mu Voice can't do when it comes to vocal harmonising, and it's all in real time, too.

Mu Voice is the first release from Mu Technologies. It's a vocal processor that's able to tune vocals, add artificial harmonies and produce a number of other interesting vocal effects.

The focus is clearly on ease-of-use, with live stage performance very much in mind. It's available in VST, RTAS and AU formats and requires the use of an iLok. A fully functional trial version is available, too.

The operation of Mu Voice is centred around two main sections: Preset and Chord. The Preset section governs the basic settings of the four synthetic harmony parts, and the Chord section keeps track of the sequences that the harmonies adhere to.

This novel approach means that the 60 Preset slots are saved totally independently of the chord arrangement, so that you can recall or even rapidly switch between different harmony types, irrespective of what the song chords are.

Then, the two sections can either be chained into a sequence using the Chord Scheme panel, or played in using a MIDI controller - Mu Voice can instantly switch between chord arrangements and the settings of the four harmony parts.

Input the key signature and Mu Voice will provide you with all the basic chord types for that key. Then there are modifiers to add a suspended fourth, sixth, seventh or ninth harmony, should you want to jazz things up with some more out-there chords.

This simplified approach will help beginners who aren't sure which chords will work in the song's key signature. However, it also suits more advanced users, because Mu Voice only locks harmonies on a chord-by-chord basis, so there's no rigid adherence to any particular key signature for the entire song.

You can really get experimental and push out colourful chord sequences with very little effort, and different chords can be triggered via MIDI.

Selecting Presets for the harmony settings is even easier. As mentioned previously, there are 60 presets, which store information on the voicing and octave for each harmony part.

There are also pitch-shifting, panning, humanising, formant and simple filter controls. The last of these offers a number of preset filters, and also something called Harmonic EQ for sculpting sounds; however, we found that these usually gave less natural and intelligible results.

The other controls were far more useful, making it a cinch to dial in and store complex and diverse harmonic variations.

The Humanize slider introduces variations in the pitch and timing of the generated harmonies, preventing them from sounding too clinical and artificial. It works well, but as with all vocal harmonising products, the real issues are with ambitious pitch-shift ranges - you can only go so far before the results sound unnatural.

The formant-shifting helps a great deal here, and in itself can be used to creatively alter the character of a voice, although this works best in busy mixes, as it can sound obviously effected in sparse songs.

Then again, with the continued success of Auto-Tune, and the prevalence of vocoders and telephone EQ effects on tracks these days, it's not unthinkable that unnatural harmonies might catch on, too.

Speaking of Auto-Tune, Mu Voice can likewise be used for automatic pitch-correction, but we found the results to be lacklustre, with undesirable sonic side-effects.

Surprisingly, one of the most interesting controls here is the panner. When Mu Voice pans a vocal part, it also introduces a time delay between the left and right outputs, creating the illusion that the voices are coming from different directions.

The end result of this is a far more 'spacious' sound than the standard panning effects we're used to hearing.

Despite a few imperfections, Mu Voice looks to be one of the most promising applications of this type that we've seen. Although initially appearing to be somewhat limited in scope, it actually has a vast range of practical uses for the musician.

From speedy voice changes to basic intonation correction and easily-accessed harmonic arrangements, Mu Voice just about has it all. You don't need to be a trained musician to get started, and you certainly don't need to spend hours automating all 70 of Mu Voice's parameters.

We had limited success applying Mu Voice to a range of non-vocal sources, but that's perfectly understandable, since the application is designed to process the human voice. Using simple synthesised waveforms, though, we coaxed some unusual chorus and harmonising effects from the software.

Regarding Mu Voice's intended use as a vocal processor, the overall sound might not be utterly convincing in isolation, but it's as good as many competing products, and is entirely acceptable within a full track arrangement.

We haven't seen anything else in this price range that can match both the sheer quality of the artificial harmonies produced and the hugely impressive low-latency performance. Stage performers on a budget will be extremely hard-pressed to find a better live harmony solution.

Check out Mu Voice's harmony generation capabilities for yourself: