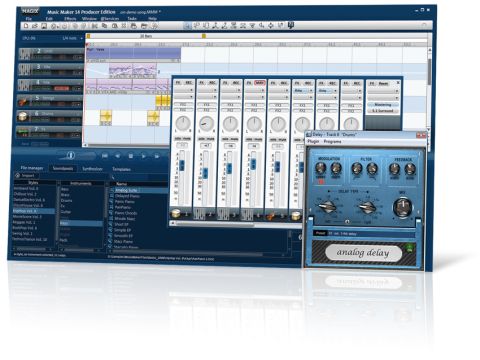 All the elements of a great program are here, but Music Maker as a whole is somewhat less than the sum of its parts

Having started life as a primitive 'loop 'em up', Magix Music Maker is these days a far more powerful and flexible beast. We're looking at the especially feature-rich Producer Edition here.

Music Maker 14 has tracks onto which you place musical clips, and a library of these is supplied, in styles such as rock, pop, dance, film score and reggae. You can drag sounds from the spruced up Media Pool onto the tracks to start making music. The supplied content is good, and is timestretched to fit the beat of your song.

You can record your own audio clips, but we ran into a huge problem: the mixer's Live button (used to enable low-latency monitoring), as depicted in the manual, was nowhere to be seen, so we were unable to record any parts due to intolerably high latency.

Music Maker has a number of features that you won't find in most of its competitors, such as the Melodyne-esque Elastic Audio pitch editor, an automatic Remix Agent that rearranges songs, and harmony recognition that's so hit-and-miss as to make it pointless for anyone who actually needs it.

It also handles video - just put video clips onto tracks as you would with sound clips. They can be layered, faded, titled, etc, and your finished videos exported in many formats.

New for v14 is the Live Performer. You map ranges in your song to QWERTY/MIDI keys and trigger them for a performance. Changes are synced the beat, and you can also program it to play parts in a specified order, which is handy for trying out ideas.

We didn't have as much luck with the Live Pads, though, which play clips that aren't in the arrangement. They didn't always fire right on the beat, and we had trouble using MIDI clips. Still, it's a promising feature.

Three of the supplied instruments are dedicated to percussion: LiViD is a virtual drummer that can play, say, a verse part in a rock style; Beatbox has a grid editor and over 30 kits; and Robota is a solid, 909-on-steroids effort.

Drum n Bass offers sampled drum loops and synthetic bass - you can tweak the playback order of the beats, but it's a bit awkward to use. Atmos, meanwhile, is a sound effects generator - the Hiphop preset sports a knob to crank up the level of 'Gunfight'.

Revolta 2 is new for Producer edition and is a rather impressive virtual analogue synth with a mod matrix, step sequencer, dual effects with 11 effects types, and a slick interface. It has lots of presets and sounds very good.

Finally, there's the excellent-sounding Vita ROMpler, with 'real' instrument sounds such as guitars, pianos, brass, strings, and - yes! - more drums. These ones sound great, though - how annoying that the weak-sounding LiViD can't drive these cracking kits.

Unlike the other instruments, which have built-in pattern editing, Revolta 2 and Vita are driven by MIDI and edited via a piano roll. Producer Edition can also use VST instruments and effects.

A virtual mixer sets levels and applies effects - all the processors you'd expect are here, as is a guitar amp sim. There's a slick-looking mastering unit too, but it lacks proper gain-staging. Overall, the effects are of a good standard.

Unfortunately, the app as a whole lacks cohesion, and isn't as good in practice as it is on paper. Speaking of which, the 300-page manual is hardly a light read, but the brief introductory video is a good start.

At times, though, we found Music Maker 14 confusing and overwhelming. There are countless annoying quirks; for instance, the generic track effects window is modal (ie, you can't use the rest of the program while it's open), and insert effects are post-fader, which isn't so desirable. We encountered other strange behaviour and some crashes too.

Music Maker has a lot going for it, but it really needs a more solid, intuitive core app before we can recommend it wholeheartedly.

Listen to a tune made using MM14's orchestral loops and Vita sounds: