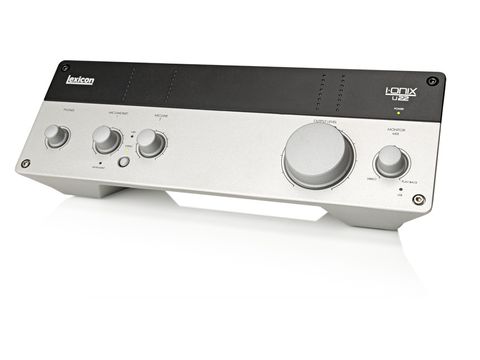 The U22 is solid, if underpowered, but we won't deny that its physical attributes give it a lot of appeal.

Although Lexicon made its name with high-end digital reverb units, it's branched out in recent years. The Ionix range of three desktop-friendly audio interfaces is the company's latest offering - they're all designed to sit between your computer keyboard and monitor.

It's the baby of the trio, the U22, that we have for review, and in terms of features, this is a simple 2-in/2-out interface with up to 24-bit/96kHz operation. Most connections are hidden round the back - including MIDI In and Out - although the instrument and headphone jacks are conveniently positioned on the sides.

The unit links up via USB 2 and is both Mac- and PC-compatible, but alas, it can't be bus powered via the cable. You won't find any form of digital audio connectivity either.

For hooking it up to your audio gear, the unit has XLR/TRS combi jack input sockets and TRS jacks for the outs. Plugging into the instrument jack automatically engages input 1, and there's a useful LED indicator just below the gain knob, in case you forget that it's active.

Both mic inputs can supply 48V phantom power (a single switch activates both channels) and, once again, there's a front panel LED indicator. The mic preamps themselves use a new high-voltage design from dbx, with a maximum gain of 58dB.

"Most connections are hidden round the back - including MIDI In and Out - although the instrument and headphone jacks are conveniently positioned on the sides."

Finally, the U22 also has a hardware input/output monitor mix knob for zero-latency monitoring routed to the headphones and the main outs.

The U22 has a solid, chunky metal chassis, and feels at home betwixt keyboard and screen. Obviously, you'll need to leave space for cabling, but the side access for headphones and instrument jack makes perfect sense.

The fact that the monitor mix affects both the 'phones and main output could be slightly annoying but, on a more positive note, there's a very useful switch that determines whether or not the inputs are blended to mono for the monitor feed or hard panned. Another plus comes in the form of the stylish LED input/output channel meters.

As is the case with most interfaces nowadays, the U22 comes bundled with some free software. The most interesting piece has to be Lexicon's own Pantheon II reverb. This VST and AU plug-in includes six reverb types (ambience, chamber, hall, room, plate and custom), spread across 35 presets. Should you want to tweak these, all 16 parameters are laid out on one page, and the plug-in is pretty CPU-efficient, too.

Unfortunately, the U22 acts as a dongle, so don't expect Pantheon II to work without the interface attached.

Next up, EZdrummer Lite from Toontrack gives you a free taster of its real drum kit ROMpler. With only 300MB of content included, it doesn't exactly set the world on fire, plus you're limited to one basic drum kit and one percussion kit. But even so, once you've registered the program, you're eligible for the upgrade path.

The bundled software is rounded off with a copy of Cubase LE.

Sonically, the U22 performs well, and there's plenty of juice in the mic preamps for most situations. The lack of digital connections on a unit at this price is surprising, however, and coupled with the fact that there's no additional software monitoring, it doesn't feel as well spec'd as similarly-priced alternatives.

Even so, the ergonomic design is very practical, and we're surprised that more manufacturers haven't gone down this path.