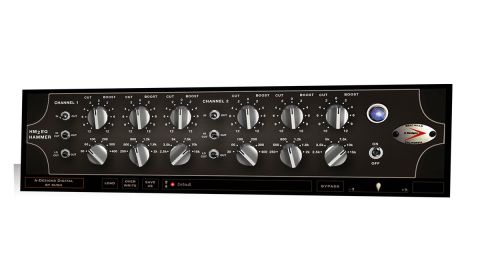 An EQ so good at making anything sound good that using it almost feels like cheating.

Kush Audio's visionary line of mixing and mastering effects put character and functional simplicity at the top of the agenda, so the recent announcement of its partnership with similarly individualistic hardware manufacturer A-Designs seems like a perfect marriage.

'A-Designs Digital by Kush', as the resulting line of plugins is known, will comprise 1:1 emulations of a range of A-Designs boxes, and the first one out of the gate takes on the revered HM2 Hammer EQ.

Hammer DSP (VST/AU/AAX, requires iLok2) is a stereo three-band EQ flanked by low- and high- cut filters, switchable between linked and independent left/right channel control. When loaded onto a mono channel, the Stereo mode button is blanked out.

Released at the end of the last decade, A-Designs' HM2 Hammer EQ has become a boutique studio favourite, thanks to its remarkably smooth and effortless sweetening of buses, full mixes and, to a lesser extent, instrument tracks. A modern classic, if you will.

The Hammer is a hybrid solid-state/tube EQ that's no longer manufactured but cost around two grand to buy when it was. Kush's virtualisation of it models the architecture and controls 100% faithfully, except for the addition of the linked stereo mode.

Of course, you can still buy the HM2 Hammer second hand, but in the interests of economy and multiple deployment, we'd probably still recommend Kush's software version over it - it really is that good. The hardware might well have the slight sonic edge when it comes to genuine 'analogue-ness', but as ever, the convenience of the plugin is compelling.

The HM2 Hammer hardware is known for its 'musical' sound, and this is in large part down to the 'Floating Q' implementation, whereby the Q (or resonance) level of each EQ filter automatically adjusts in response to the gain of the input signal at that frequency, but without ever narrowing down beyond a generally broad overall shape.

Hammer DSP does a superb job of replicating this - just point a given band in vaguely the right direction and it seems to home in on the sweet spots with unerring accuracy. There's something about the prescribed frequencies that always feels right - the bottom end gets tighter, the top gets brighter.

It's the effect on the mids that's most striking, though, delivering sublime enhancement of snares, guitars, vocals, etc, without the harshness that often accompanies boosts in that area. It's undoubtedly at its best on busses - groups and/or the master - where the combination of midrange smoothness and focused low-end works wonders every time.

If we have to make a stab at finding fault, we're undecided as to whether or not Hammer DSP should include a UBK mode, like that of Kush's Sly-Fi Axis EQ, making the frequency bands sweepable. It would be a cool addition, obviously, but a large part of the plugin's charm comes from those prescient fixed bands, so we're not sure if we'd ever really use it even if it was there.

Hammer DSP has already earned itself a permanent home on our mix buss. It's one of those processors that can't help but make things sound 'better' in terms of analogue-style cohesion, warmth and 'finality'.

It's not a surgical EQ in any sense, so you won't be correctively notching out narrow rogue frequencies with it; but feed Hammer DSP any problem-free signal and the improvement is palpable every time. A fabulous, friendly 'character' EQ with no learning curve, this one's unmissable.