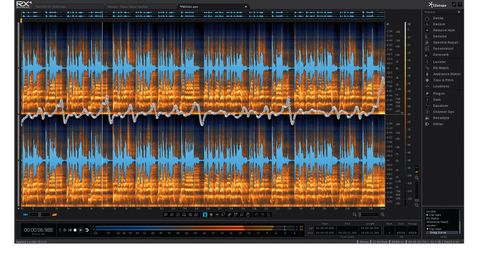 iZotope have pulled another rabbit out of the hat with RX 4, the best restoration and repair suite ever conceived.

iZotope's RX series has been impressing us since its inception in 2007. Since then, it's grown from promising beginnings as an immensely capable audio repair and restoration package (even by today's standards) to a full-blown, plugin-hosting, multi-tabbed audio editor with a wealth of powerful features.

Like its predecessor, RX 3, RX 4 comes as a standalone application comprising a range of restoration and repair modules, some also included as individual plugins (VST/AU/ RTAS/AAX). There are two versions available: RX 4 and RX 4 Advanced, the latter including extra modules but costing significantly more.

The RX workflow centres on the spectrogram editor, which uses blobs of colour to represent the frequency and amplitude of the loaded audio file over time. This may sound like an unusual editing environment, but manipulating audio in the spectrogram editor is actually very intuitive - vaguely analogous to 'PhotoShopping' audio, if you like.

There's also a standard waveform view in place, too, though, in case you just can't live without one - a crossfader sets the relative opacity of it and the spectrogram, cleverly. So, what's new in v4?

Clip Gain is a non-destructive amplitude envelope drawn into the main display. It's intended for levelling inconsistent audio but can also be used for creative effects, too.

Hit Ctrl/Cmd-G to reveal the white Clip Gain line in the middle of RX 4's editor, then click it to create a node that you can drag upwards for up to 36dB of gain, or down to complete silence.

You can add as many nodes as you like and move the whole envelope by Shift-dragging it, and every change made is reflected in the waveform and spectrogram displays.

On the down side, it only applies its envelope to the entire signal, and we can't help but wish there was a way to apply it only to a selected frequency range.

The Dialogue Denoiser tab from RX 3 Advanced's Denoiser module is now included in the standard version of RX 4. This specialised tool is able to reduce even moderately high levels of background noise from voice recordings, without the typical noise reduction artifacts that often compromise speech clarity.

iZotope makes it clear that it's designed for spoken word recordings, and it is indeed great for cleaning up dialogue that's been recorded in an acoustically less-than-optimal environment, but we also found it to be useful for cleaning up dirty, old vinyl-sourced acappellas.

The Remove Hum module eliminates the fundamental and harmonic frequencies of user-defined background hum (electrical hum, for example), and is now armed with an Adaptive mode that follows those frequencies as and when they change over time (for dealing with recordings made in multiple locations, say).

On that subject, RX 4 does actually make it possible to select a frequency range for processing with its own modules or third-party plugins. Disappointingly, though, it's not possible to preview that range on its own - clicking Preview always auditions the full-spectrum result.

For example, you can't select a frequency band in a vocal recording for processing with a gate plugin and hear how that band sounds on its own as you adjust the gate settings, which would obviously be very handy.

As well as the new and updated modules, RX 4 introduces the Connect plugin, which enables integration of the standalone editor with DAWs that don't allow you to set RX up as an external audio editor.

However, if your DAW does let you set an external editor, RX 4 Connect won't function at all, even if you want it to (because you don't want to override your established audio editor assignment, for example).

Anyway, the plugin transmits audio from your host to RX 4, either 'one-way' (ie, purely for analysis), or for processing and editing, before being returned to your DAW in its altered state, where it's rendered, replacing the original material.

On top of that, the RX Monitor plugin lets you route RX 4's audio output through your DAW, so that you don't have to close it if it doesn't allow other applications to share the system's audio hardware (we're looking at you, Pro Tools).

Alongside the headline new features, the usual raft of lesser tweaks has been applied, including some subtle adjustments to the RX GUI, refining it a touch beyond the major visual overhaul introduced with RX 3.

RX 4 is a significant and impressive update for existing users, and those completely new to the software will be simply blown away by its functionality and sound. Of particular note, RX 4 is much better at handling vocal recordings than its predecessors and, indeed, the competition.

The new features won't be sufficient to tempt every computer musician to get involved in what is a decidedly specialist tool that they might not really need, but for anyone already bitten by the RX bug - particularly those working in the mastering, broadcasting or post-production worlds - this is another essential update from the Bostonian DSP geniuses.