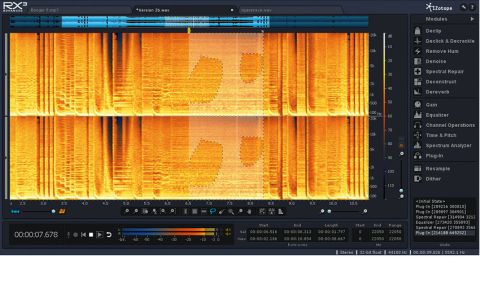 Perhaps the most powerful audio manipulation/repair software we've used, RX 3 is a must-have for serious producers.

We can hardly believe it's been six years since iZotope first stunned us with the original RX, its innovative audio restoration package comprising a beautiful, spectrogram-based audio editor and a tidy collection of dedicated processing modules (also included in VST/AU/RTAS/AAX plugin form) for nixing noise/hiss, clicks/crackles, hum, and even clipping, all delivering astoundingly convincing results.

The software opened up all manner of super-precise editing possibilities that were previously difficult - or even impossible - to achieve with existing software and revolutionised audio editing in terms of soundtrack production, music restoration and sound design. It felt like a taste of the future, and we couldn't wait to find out where the platform would go next.

Well, since then we've had the even more impressive RX 2, and now the third version is here, boasting a sexy new interface that not only looks great but also feels as robust and responsive as ever. The graphics and colours have been reworked to make RX 3 easier on the eye than its previous incarnations.

The most immediately noticeable GUI change beyond that is that the spectrogram editing window takes up much more of the interface than before, while the modules to the right-hand side can now be collapsed down to a thin column of icons, releasing more editing space (previously it was all or nothing).

These two things alone make using RX 3 friendlier than before on a fundamental level, and if you've used one of the previous versions, you'll appreciate the fact that none of the essential components have been repositioned, so there's no 're-familiarising curve' involved.

Could it be magic?

On to the new features, then. Two that we're particularly pleased to see - despite iZotope not making much noise about them - are the Invert Selection and Invert Selection Frequencies functions. These make for incredibly useful companions to the Magic Wand tool: now you can click to automatically select the most prominent frequency region under the cursor using the Magic Wand, then hit Invert Selection in order to process everything but that region.

With a little care (and a lot of patience!), we were able to isolate single instruments from full band recordings via this method, then use RX's restoration modules to fix any unwanted side effects brought on by the isolation process.

Similarly, when using the lasso, brush or any of the frequency selection tools, you now have the option to automatically select any or all of up to ten additional harmonics for manipulation. Clever.

Another welcome addition is tabbed workspaces, allowing multiple restoration jobs to be kept open at once within a single instance of the software. Even better than that, though, you can also now save an unlimited undo history along with each audio file in the shape of an rxdocument file. So now you can journey back through all the edits made to an audio file years after the event, rewinding it all the way back to the original source if necessary!

Finally (well, in as much as we don't have space here to cover all the new features; see the full list on the iZotope website), you now get plugin hosting as standard in both versions of RX - previously this was the preserve of RX 2 Advanced owners only.

The closest thing we have to a criticism of RX 3 is the absence of FLAC support and lack of a reverse audio function. While these are pretty insignificant omissions, and you probably wouldn't invest in RX 3 with either of them in mind, we do feel that if you're paying the considerable asking price for the Advanced version, you should arguably get all the functionality of a general purpose audio editor to boot - just for convenience if nothing else.

However, in iZotope's defense, it has taken a big stride in this direction with RX's new-found ability to record audio directly, and the new Channel Operations module, which enables you to cross-mix stereo channels and rotate phase.

Just as its two previous versions did, this third instalment in the RX saga demonstrates that iZotope is ready, willing and extremely able to continue refining and extending the capabilities of its amazing audio restoration software while the competition still struggle to even match the power of version 1.

The new interface is smart and dazzling, and the new modules in the Advanced version continue to push the boundaries of audio restoration technology. It simply refuses to disappoint, no matter what you throw at it.

Whether you need to clean up noisy instrument recordings, enhance vocal or dialogue takes, get the most out of audio recorded on location, repair a clipped take that can't be re-recorded, get rid of that bloody telephone ring in the background that went unnoticed during the session, or restore a rescued tape or vinyl record, RX 3 has you well and truly covered.

We can't recommend it highly enough, and - apart from those basic audio editing functions - we're honestly at a loss to imagine what more can be added for v4.