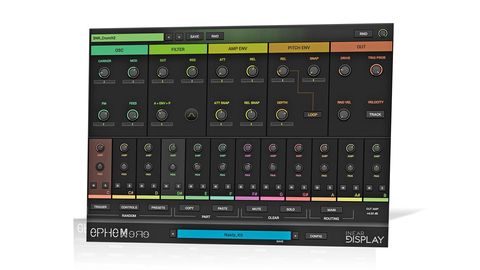 Great FM synthesis, easy programmability and superb randomising make Ephemere a drum machine to be reckoned with. It could do with some effects, though.

A 12-channel drum machine, Ephemere (VST/AU) generates sounds through a bank of 12 identical FM synths, each one assigned to a fixed note of the octave.

There are no discrete modes or architectures for each type of drum (kick, snare, etc); all 12 are equally capable of the full gamut of percussion sounds, and simply titled with their triggering notes - the option to rename them seems like an obvious request.

The GUI is split into three zones. At the top there's preset, randomisation and synthesis controls for the currently selected sound, while below that is a mixer with Amp (level) and Pan knobs, and Mute and Solo buttons on view for all 12 notes/channels.

Clicking anywhere in a channel strip selects that channel for editing in the synthesis section above. Finally, you get global randomisation switches, a master gain control, various ancillary buttons (Copy and Paste, etc), the preset Kit library and the Config menu (Undo/Redo, Initialize, UI Scale, etc). It's a very quick layout to find your way around.

As with Inear Display's other plugins, controlled randomisation is one of Ephemere's headline features. At the top left of the GUI, the RND button randomises all parameters of the selected sound to an extent determined by the dial next to it. So, with it only raised a touch, the newly created sound won't be too distant from the starting point. All the way up, however, and the old and new sounds will bear no resemblance to each other at all, except by coincidence.

The Random section has buttons for shaking up the whole kit: Trigger randomises all Trig Prob knobs, Controls randomises all synth controls, and Presets chooses a random sound preset for each channel.

Our favourite of all, though, is the slider under every synth control that lets you set a range to randomly set its value with each incoming MIDI note. Using this, you can breathe real life and organic motion into even the most rigid of drum patterns.

Presets are handled at both the kit and sound level, with 12 kits and 159 sounds onboard. It might not be a vast collection, but making new sounds and kits is so easy that expanding it with your own creations becomes part of the workflow.

Each FM synth comprises carrier and modulator oscillators, both outputting frequency-adjustable sine waves. The FM knob determines the depth of modulation applied by the modulator to the carrier frequency, while Feedback sends the output signal back into the carrier input for another layer of modulation.

As is the way with FM, even small adjustments to the oscillator frequencies, FM depth and feedback can have a radical effect on the final output.

The 12dB/octave resonant filter offers a choice of low-pass, high-pass, band-pass and notch modes, and features a bipolar control for dialling in modulation by the Amp or Pitch envelopes.

The Amp Envelope is two-stage (Attack and Release), as befits its percussive application, and the slope of each stage can be shifted from linear to exponential using the Snap knobs.

The Pitch Envelope provides that essential downward kick/tom pitchbend with its Release, Release Snap and modulation Depth controls, and is loopable for pseudo-LFO and delay effects.

Finally, the Output section houses a more/less Distortion knob, a switch for turning amplitude Velocity sensitivity on and off, and the Trigger Probability control, for adjusting the likelihood of each incoming MIDI note actually triggering, from 0-100%. The distortion sounds decent, and Trig Prob is great for adding a bit (or a lot) of performance variation, albeit with no way to capture the results.

As you might expect, being an FM synth, Ephemere is rather more expressive when it comes to snares, cymbals and metallic percussion than it is kicks, toms and other 'pure' drum sounds, but it's certainly not lacking in any department.

With just that one synthesis technique in the clip, it does have a particular sonic fingerprint - an analogue oscillator would significantly broaden its range, as would an effect or two - but for raw, hard-edged, high-impact, clangorous percussion, and even the odd bass, lead or FX sound, this is a well designed, tightly focused plugin with real punch.