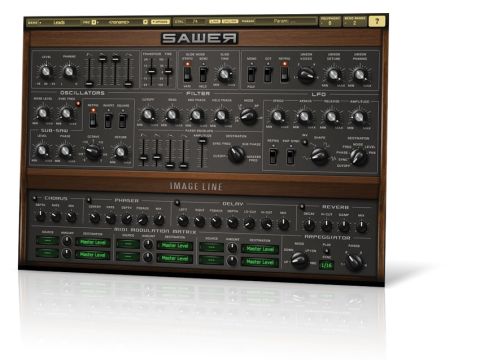 Sawer offers some insanely punchy analogue sounds, and while it has its limitations, we can't help but love it.

Purportedly inspired by the obscure (in the decadent West, at least) Soviet-era Polivoks synthesiser, Sawer is really a rather simple affair.

Tone generation comes from two oscillators: a main oscillator, which can only produce a sawtooth waveform, and a sub oscillator that outputs sawtooth or square waves and can be independently tuned in cents and/or octaves. The Octave knob ranges from -2 to +2 octaves and, unusually, is stepped in half-octave increments.

The sub oscillator also has Level and Phase knobs; a Retrig switch that causes the phase of the waveform to reset on a new note; and optional polarity inversion. There's also a Noise Level knob for introducing grit to the signal.

The sound can be further beefed up with the synth's unison options, which can give 1, 2, 4 or 8 voices per note. There are controls for detune amount and stereo spread, and an Oct switch to pitch half of the voices up by an octave.

Activating the Retrig option causes each of the detuned voices' waveforms to reset their phase at the start of a new note. All told, the unison section can kick out some splendidly phat timbres, but it'd be even better if the Unison Detune knob had a greater range, for creating very heavily detuned tones.

You can opt for polyphonic or monophonic modes, with the portamento options including static (fixed time) or variable (fixed speed), bend/held modes (ie, legato) and glide time.

Sawer's sync mode uses an inaudible third oscillator to retrigger the waveform of the main one with each cycle. This can be tuned using the Sync Freq knob and is capable of yielding satisfyingly crunchy timbres.

The pitch of the hard sync oscillator can also be manipulated by the instrument's modulation envelope and LFO to excellent effect. The LFO features four wave shapes; retrigger, sync and inverse switches; and knobs for attack and release time, to have the modulation intensify or fade out with note start and end - we do wish more synths offered this highly useful feature. There's also a simple ADSR modulation envelope.

However, a single envelope and LFO is a bit meagre these days, and the fact that you can only have one destination for each is very limiting. Furthermore, the modulation amount knobs could have greater ranges, for more intense changes - for example, when modulating the filter with the LFO, it's not possible to have the filter go from fully closed to wide open, so to speak. There is a 'modulation' matrix, but it's just for assigning MIDI CCs to parameters.

Moving on, using a short envelope to modulate the sync level and engaging the aforementioned Retrig options produces pounding basses and hard-hitting leads, making Sawer a great choice for anyone who craves edgy, ballsy synth sounds.

Oh, and there's a filter section, naturally, with high-pass, band-pass and low-pass modes (the latter is switchable between 12 and 24dB per octave), and key and velocity tracking. You also get a decent arpeggiator and great-sounding chorus, phaser, delay and reverb effects - the phaser is particularly impressive. The lack of any kind of waveshaping or distortion is a pity, though - we'd love to hear how Sawer sounds when it's been roughed up a little.

While Sawer is lacking in a few areas - notably the modulation department - it packs an enormous amount of sonic punch. However, we do hope that Image-Line will consider adding a few more features in an update - that is, if it's not already plotting a super-synth based on Sawer's formidable engine.

Listen to some of Sawer's sounds