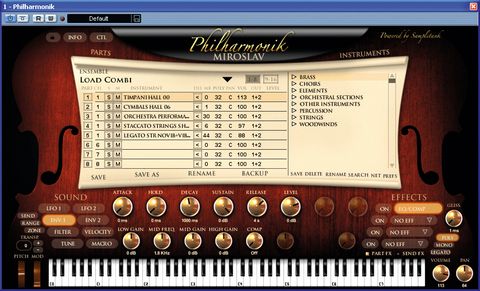 An excellent orchestral sound solution - one of the best on the market, in fact.

Miroslav Philharmonik brings the whole orchestra to your PC.

STRETCH analysis can cause a few problems.

Miroslav Philharmonik is billed as an 'Orchestra and Choir Workstation', but it's perhaps better described as a comprehensive classical sample library in a custom interface.

It makes sense to create special versions of sample playback engines (such as HALion, Kontakt and SampleTank) as they enable companies to copy-protect their expensively produced libraries and combine them with a dedicated user interface that's perfectly suited to the sample content.

Miroslav Philharmonik is powered by a custom version of SampleTank 2.5 and features a reverb effect that's specially designed for classical music. Although installing the software is comparatively easy, the copy-protection system is unusually over-the-top.

Miroslav Philharmonik is protected both by a Syncrosoft USB 'dongle' and an internet-based software registration procedure.

If you use another Syncrosoft-protected product (such as Cubase SX), you can reclaim a USB port by moving your Miroslav Philharmonik licence across to the other dongle, but you'll then need to reauthorise the software, which is rather annoying, to say the least.

Even if you use the original dongle, you're still required to carry out reauthorisation when using the software on another computer.

In all fairness, IK Multimedia does have a lot to protect here. The original Miroslav Orchestral Sample Collection is a very expensive classical sample library, and Miroslav Philharmonik contains the whole thing. On top of this you'll also find some previously unreleased material from the original recording sessions in the Dvorak Hall in Prague.

This new content has been carefully mapped into additional presets by the engineers at IK Multimedia. But let's get to the point: Miroslav Philharmonik sounds absolutely incredible.

From the moment you play your very first notes, it's clear that you've got something very special in front of you. The samples have a warmth and depth that owes less to the recording process than it does the manner in which they were originally performed.

Often, the solo violins you'll find in generic sample libraries can be a bit cold and clinical, but this one sounds like it's been played with real passion and feeling and works beautifully when you're trying to create an authentic solo - it stands out and feels like proper performance.

This is one of the many reasons why the Miroslav Orchestral sample library has been used in film soundtracks and television commercials the world over.

IK Multimedia, for its part, has added industry-standard synth-style controls so that you can easily modify the sounds to suit your particular taste. You get a switchable multimode filter and two sets of envelope controls - one for amplitude and another for both pitch and filter cutoff modulation.

There are also two tempo-synchronised low frequency oscillators: LFO-1 has a delay control for more realistic vibrato and tremolo effects, and is depth-controlled by the modulation wheel on your MIDI keyboard; LFO-2 has a pan control for Auto-pan type effects.

The plug-in environment is configured as a 16-part multichannel, multitimbral ensemble with four insert effects per part. You can also apply four system-wide send effects. Naturally, if this isn't enough, you can simply load further instances of the plug-in until you've reached the processing limit of your computer system.

The sample player remained extremely stable throughout our testing process. The only problem we had was that the STRETCH analysis for some of the ensembles tended to freeze the plug-in. However, once individual presets had been analysed this problem went away entirely and never came back.

Miroslav Philharmonik contains virtually all of the classical instruments that you could possibly want or need. You get everything from strings, woodwind and brass through to percussion, keyboards and a truly spectacular cathedral organ.

You're even supplied with a handy wallchart that shows the correct pitch range and spatial placing for each instrument within a concert setting.

It's worth pointing out, however, that all of these instruments were recorded in the standard classical style. The Steinway Grand Piano for example, while ideal for classical pieces, lacks the gritty 'up-front' tone that's usually required if you're producing modern rock/pop tracks.

In addition to the standard 'multisampled' keyboard layouts, you also get some bonus presets of so-called 'menu' selections. Contained within these are trills, crescendos, glissandos and other articulations that you can use to spice up your composition. These are new, and unique to the IK Multimedia version of the Miroslav sample library.

At £399, Miroslav Philharmonik is not for the hobbyist musician. Then again, this kind of user is unlikely to get the best out of it. In order to create truly outstanding results with the software, you need to be an experienced composer who knows how to get the most out of every instrument that's been sampled.

But even at this price, Miroslav Philharmonik represents great value. Orchestral sample libraries of this quality used to cost the earth, and they never came in such convenient plug-in interfaces. Highly recommended.