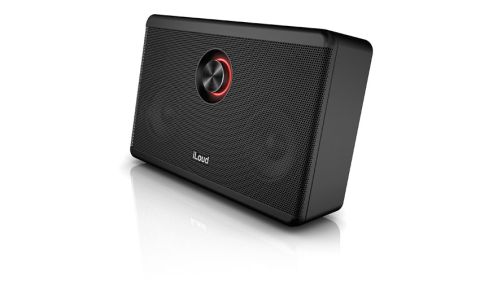 You wouldn't want to mix with it, certainly, but for writing, sound design and recording on the go - not to mention simply listening - the iLoud is a resounding success.

We have to confess to a certain amount of eye-rolling when we first heard that IK were releasing a speaker cab for mobile musicians. Apart from the obvious issue of stereo imaging, we just weren't convinced that enough power and accuracy could be designed into something so small. How wrong we were!

The iLoud packs an impressively robust set of speakers and an iRig mic/guitar input into a sturdy plastic housing roughly the same size and shape as an iPad from the front, just shy of 6cm deep and weighing 1.33kg.

The speaker system comprises two 3" neodymium drivers, two 3/4" tweeters and a bass port, and DSP is used to control the four onboard power amps (totalling 40W) and their digital crossovers, making the iLoud "the smallest bi-amplified audio system on the market". Frequency response of 50Hz to 20kHz is claimed, but we could still just about hear a sine wave at 30Hz.

Power comes from a rechargable Li-Ion battery, which gives a very respectably ten hours of use at medium volume, and fully charges in about two.

Audio input is via Bluetooth (just hold down the Pairing button on the back to pair up to two devices at once), or stereo 1/8" minijack (a 1m TRRS cable is supplied). While Bluetooth is fine for recreational listening, its latency renders it ineffective for monitoring of software instruments, so musicians will definitely want to plug in.

Jack a mic or guitar into the 1/4" mic/instrument input and, rather than passing directly to the amp, it's sent to the connected iOS or Android device for processing and recording in any app you like (IK's own Amplitube, for example).

We're pretty stunned by iLoud's performance - it really does sound great. Obviously, it has a very narrow stereo field and it can't pull off the sheer weight and depth of a full-sized monitor setup, but it does deliver an unexpectedly tight low end, impressive clarity in the mids and highs, and bags of volume before it starts to lose the plot.