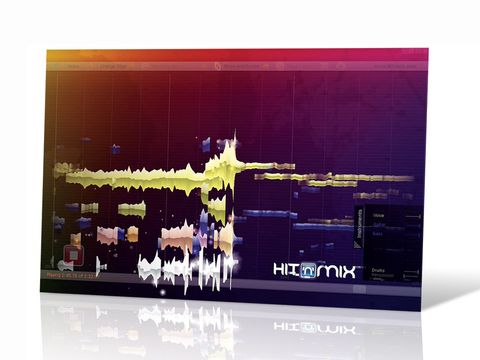 As a pitch editor for single instruments, Hit'n'Mix is good, but it fails to deliver on its promise of ripping apart full mixes.

Remixers and bootleggers will have been excited at the announcement of Hit'n'Mix, a standalone app for PC that claims to reach into a recorded music file and 'unmix' it, splitting it into its component instrument parts.

The closest software has come to this so far is perhaps Celemony's Melodyne DNA, which lets you adjust notes within a recording of a polyphonic instrument. Being able to unmix a complete track is the Holy Grail of music technology, and if Hit'n'Mix can deliver the goods, then nothing is sacred and remixing will change forever.

Open the program and you're presented with a slick-looking interface. Pitch is represented vertically, piano roll-style, with time running left to right. The colourful analysis of the track's notes is overlaid on the piano roll, so it looks more like the note editors we're used to than a spectrogram.

Importing a song is simple, but the software is slow to analyse it. That's fair enough, considering what it claims to do is quite a task. We tried Hit'n'Mix with everything from DnB and pop to classical and rock, and were met with varying degrees of success.

Full-on electronic music returns a messy and crowded screen of elements that are of no particular use in isolation, and finding related parts is frustrating.

When used with a simpler pop song - we tried Someone Like You by Adele - the software fared much better in identifying the discrete parts, presumably due to the instruments being fewer in number and less harmonically complex.

Once decoded, the parts are coloured by type (Voice, Guitar, Sax, etc), which Hit'n'Mix guesses reasonably well, and each group has its own mixer fader, so you can mute or solo the parts, the usefulness of which is determined by the success of the initial analysis.

Unfortunately, the individual elements are separated in a way that often sounds like an audio artefact rather than a coherent musical part. Even dragging to select multiple parts usually results in nothing more than a recognisable but washy-sounding facsimile of the track.

This is explained in the manual as being a result of the complexity of the task in hand, but that is the primary function of the software after all.

We weren't expecting perfect separation by any means, but the results are usually so poor that they're of no practical use.

A Change Style feature remaps the song's notes to a different scale, with vague options such as Edgy and Arabia. More useful are the pitch correction, quantising and harmony tools that - if the track has been analysed well - allow fairly good control over pitch.

Other options include adjusting timing of notes, panning them, setting levels, and copy/pasting of sections. You can open several songs and paste between them.

Workflow is hindered by the omission of some basics like pressing Space to play/stop, while a highlighted note on the piano roll that follows your cursor would improve workflow.

Should you wish to save your work, you can export projects as low bitrate MP3 or WAV, or share with other users via the proprietary RIP file format, which enables you to open files without the need for reanalysis.

Time to pitch in

The software's pitch-correction tools could be of interest to those not looking to strip things apart. If you have an acappella, or a solo musical part, for example, you could use Hit'n'Mix to add vibrato to it, 'flatten' it (ie, remove pitch variation within a note, such as vibrato), and adjust and snap the pitch to the nearest note.

If you're not interested in adjusting individual notes, the pitch-correction tools cater for wider passages too. Just select the section you want to fix and choose one of the tools from the dropdown menu. Options are limited to the basic pitch-adjustment tasks, but the presets should serve most needs.

The same tools can be used to create Auto-Tune-style effect by pitching vocals up or down to the same musical note. Experimenting with this effect can lead to some interesting results, and it's certainly something that's worth exploring.

Overall, Hit'n'Mix feels premature, with the creators already promising improvements for the next version. We suggest that you hang on till then, as this one isn't much use for producers.

Now listen to our audio demos to hear the results of Hit'n'Mix for yourself: