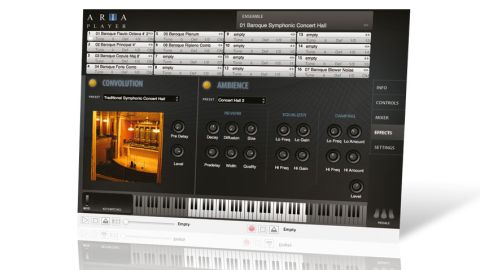 Short of actually booking yourself in for a session at your local church, this is as good as it gets.

Described by Mozart as "the king of instruments", the pipe organ isn't something that gets emulated in software too often. Garritan have multisampled six of the things and a total of 75 stop configurations to create Classic Pipe Organs.

Up to 16 stops can be loaded into the hosting Aria Player engine (now with convolution reverb) at once, enabling free mixing and matching of stops between organs (and any other Aria Player ROMs you might have installed) for huge hybrid sounds.

The instruments themselves span 400 years of organ construction history, from a 1583 Renaissance to a 1966 American. Weighing in at just 1.4GB, the hard drive footprint is relatively light, although you certainly wouldn't know it from the sound, which is nothing short of magnificent throughout.

The range of sounds covered is as expansive as six sampled pipe organs could ever be, and numerous UVI performance and sound-shaping options are on hand with which to extensively customise them. MIDI control options include Swell, Chiff and Blower Noise (volume control for 'chiff' and blower sample layers), Tremulant (tremolo, with variable rate and depth), Pedal Bass Fundamental (volume control for the longer pipe samples), and a set of Crescendo Pedals (for triggering progressive stacks of stops).

Gary Garritan is incredibly passionate about pipe organs (as the historically detailed manual makes abundantly clear), and every ounce of that passion comes across in CPO. The power, intensity and tonal depth it displays are truly something to behold.