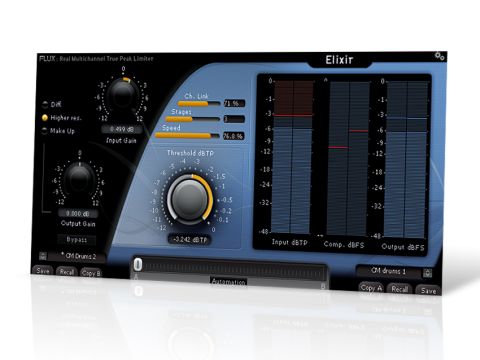 Quick and easy to use, impressively transparent and multichannel-capable, Elixir is a versatile and powerful limiter.

French developer Flux produces a range of impressive plug-ins including Solera II and Alchemist, which are single- and multiband dynamics processors respectively.

Both are powerful and complex devices, handling a range of tasks, including M/S processing and decompression, with features such as multiple release modes and A/B preset morphing. Elixir aims at a more focused target - master limiting - but with Flux's own True Peak intersample peak limiting and multichannel support. And although it retains Flux's A/B morphing, Elixir has a much simpler feature-set than its siblings.

The main controls comprise Threshold, Input and Output Gain (+/-12dB) and automatic gain Make Up, with the main meters showing input level (with threshold), gain reduction and output level. With the output gain control following the limiting stage, you have the ability to overload the output or set the gain make-up manually.

Elixir can handle up to eight channels of multichannel audio, and if you load it into a surround channel, then the metering display automatically expands to match. It also includes a flexible limiting channel link control, which is particularly welcome in surround scenarios.

Finally, the A/B preset morphing system features an automatable morph slider and an automation bypass button as well as its own preset management system - the Save, Recall and Copy buttons that you can see in the bottom corners of the interface.

Elixir is very, very easy to use. For typical mastering limiter behaviour, simply switch in the auto Make Up and set the output gain to achieve your margin below 0dB full scale (-0.1 dB, say).

Beyond that, Limiting is influenced by three controls: Stages, Speed and Higher Res. The last of these switches the algorithm to a more CPU-intensive high-resolution processing mode, while the other two influence the dynamic envelope behaviour. There's also a very useful button marked Diff that lets you monitor the difference between the input and output signals.

Elixir uses multistage processing that can be set between one and five Stages; this control is key to how Elixir sounds, particularly in terms of how it handles transients. All it really does is apply the plug-in's limiting algorithms more than once, effectively creating an adaptive response.

So, if your Threshold is set at -10dB, Elixir will only aim to hit that threshold in the final stage, going for higher (-5dB, say) at first. The process is influenced by the number of Stages you opt for, with the results being more transparent the more you use.

Elixir's Speed setting influences several parameters, including look-ahead time, release time and envelope smoothing. However, the algorithm is also program-dependent, so the shape of the incoming signal further influences those parameters.

To keep things simple, Flux has packaged all of this in one control (0-100%) and suggests that 50% is optimal for most situations. Moving up towards 100% speeds things up, although you can expect more distortion.

After much listening, comparison and staring at waveforms, we came to the conclusion that adding more Stages results in less harsh handling of transients. Sometimes this is a subtle effect and sometimes it isn't.

Of course, if you want a sharp, clipped sound (for punchy drums, say), then fewer stages might work better. Equally, ramping up the response Speed can also be useful for getting drums slamming.

The number of Stages set does have an effect on CPU hit (each Stage uses more CPU), but we found that this control had a more beneficial impact on the sound than engaging the higher resolution mode, which doubles the CPU usage. In assessing how Elixir behaves, we also found the Diff monitoring mode helpful - when hitting it hard, it can be a very useful reference tool.

Elixir lacks some of the options we've seen on other mastering limiters (eg, dither, transient enhancement and saturation) and you only get the one limiting type (but with a variable number of Stages - see the More on stages and speed box). However, it delivers plenty of loudness, and although it's not the most aggressive limiter we've ever used, it is beautifully transparent and thoroughly effective.