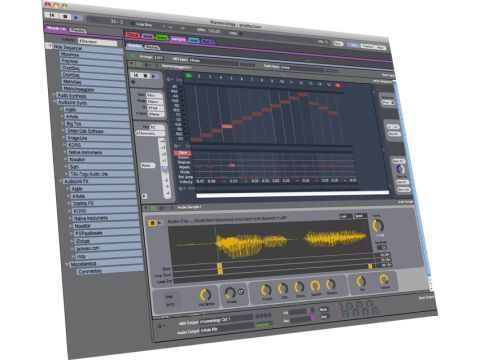 Back in the '70s, step sequencers (Moog's 960 is the one that usually gets mentioned) were the only way of programming electronic music - entering notes as the sequencer cycled round (usually) eight steps. Nowadays we've got way more sophisticated 'sequencers' in DAWs like Logic and Cubase, but the step sequencer lives on, in drum machines, boutique hardware and software like ReBirth and Arturia's Moog Modular V.

Numerology, first released in 2004, is a modular system with different sequencers for different jobs, like Drum Seq for beats, MonoNote for monophonic parts and PolyNote and Chord Seq for...well, you figure it out. Other modules contain fun stuff like a sampler, LFOs, envelopes, CV Mixers, and MIDI generators.

Numerology hosts Audio Unit instruments and effects, completing the self-contained programming and performance environment. MIDI learn is supported, so it'll work with any MIDI controller, but version 2.3's big news is support for Novation's Launchpad, promising a deeper hands-on feel than is possible with other devices.

The Numerology application folder contains HTML documentation and a few example projects, mostly of an experimental nature, but we'd like to see more varied examples, a PDF manual, and some ready-to-load audio content, especially drum kits.

Ableton Live users will feel right at home with Numerology's interface. At the top of the screen you'll find transport and sync controls and view buttons. A browser-type area on the left manages modules, Audio Units and presets. The main project screen shows either the rack, timeline, or the mixer.

Instead of 'tracks', Numerology uses stacks - groups of vertically arranged sequencer modules and AU instruments or effects. Stacks live in the rack, and can be renamed, reordered and colour-coded. Up to eight Aux stacks are available for effects use (the master track doesn't host effects, but you can handle that using the Auxes, too).

Audio and MIDI routing can be configured separately for each stack, though you can't record audio into Numerology, which is fair enough, given the concept of the software.

It doesn't take long to get started. Drag in a sequencer module, then an AU instrument, then an AU effect. Hit the spacebar to start playback, draw in some notes, and explore the other parameters than can be sequenced - like Gate, Groove, Step Length and Velocity. You don't have to know what you're doing at this point, just play around until it sounds good!

Strangely, Numerology doesn't have undo via cmd+Z, which drove us nuts after a while. You can change pattern lengths and direction, shift events in a sequence left or right, or force notes to conform to specific scales. When you get a combination you like, hit the 'snap' button to create an instant preset - switch presets by clicking them, or mapping them to MIDI or QWERTY. Presets are quantised to whatever value you select on the mixer page, so you can switch seamlessly in a live set.

With just a few stacks, you can build complex and ever-changing patterns, but it doesn't end there - Ctrl/right-click on any control to choose Add modulation and create a new LFO or Envelope module that automatically links to that control, adding more evolving layers to the sequencing. We don't want to overdo the Ableton Live comparisons, but this is more like using Clip Envelopes in Live than anything else (one smart difference is that Numerology accepts more than one AU instrument in a stack).

The full range of modules is located under the Advanced Library tab - if you don't want the automatic routing that occurs when you load a module, you can do it manually. Hit the 'tab' key to flip the rack over and start dragging those little cables around, just like in Reason.

Numerology will sit at the heart of a hardware system, sending MIDI or CV messages to hardware synths (CV would have to go via Expert Sleepers' Silent Way plug-in and a compatible audio interface). In fact, CV modules are used throughout Numerology's stacks, for functions like the LFO we mentioned earlier, but you don't have to think about that unless you want to.

You build arrangements by dragging patterns onto the Timeline, but editing is limited. There's no MIDI export either, and no way to capture real-time performances within Numerology (though there's a record-to-disk function on the Mixer page).

All this might leave you feeling restricted using Numerology as a standalone app - luckily, it ReWires to other DAWs.

The major selling point of Numerology 2.3 is the Novation Launchpad support. This is true integration - no other applications need to run in the background to make it happen. Numerology can't share the Launchpad with another application, but if you've got two Launchpads, you can use one with Numerology and the other with Ableton Live.

The Launchpad can trigger presets and control any sequencer module, with sequences up to 32 steps long, up to 16 stacks, and up to four sequencers per stack. There's also a mixer page with a start/stop button.

Each module in a stack appears as a coloured button at the top left of the Launchpad, with different colours for each type of module (like amber for ChordSeq, and red for MonoNote). Push one of these buttons to begin editing the parameters for that module.

With so many layers of control available, there's a lot to remember, so there are sticker templates (with a cheeky Five12 logo to paste over the Ableton one) and cheat sheets to download from the website.

The pairing of Numerology and Launchpad feels very hardware-like, and other than Live itself, Numerology is the definitely the best match for the Launchpad.

Don't confuse Numerology with brainiac apps like Max for Live. Sure, you can go routing-crazy with it, but this is a fun machine that's easy to use, and does some unique things that you can use in studio or performance scenarios.

It plays nice with other apps, and the Launchpad integration is too much fun. If you want it to feel any more hardware than this, buy some hardware!

Hear what Numerology can do: