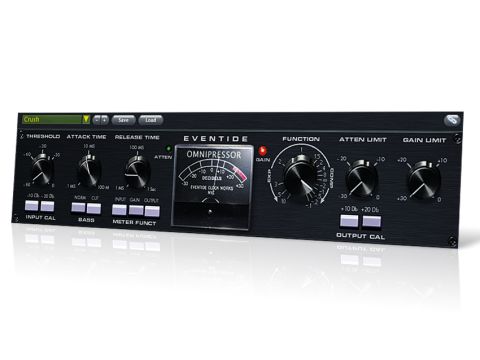 Eventide has only ever made TDM plug-ins, which put it off the map for your average computer musician. Now the company is making steps towards the mainstream by releasing some of their existing plug-ins in native format.

The first two are Omnipressor and 2016 Stereo Room. We're looking at Omnipressor here, and it's in AU format for Mac, VST for PC, and AAX for both.

Much like other Eventide products, the original '70s Omnipressor hardware is a very individual device, packing in gating, expansion, compression, limiting and what the company call 'dynamic reversal'. Each process is mutually exclusive and selected using the main Function knob, while dynamic behaviour is tailored using four main controls.

Attack and Release give typical envelope shaping but with pretty flexible settings (0.1ms isthe fastest attack and 1ms the fastest release). Atten Limit and Gain Limit provide maximum settings for each (variable from 0 to +/-30dB).

In the middle of the interface you'll find the main needle meter. This has three settings (Input, Output and Gain), with the Gain option showing both gain (to the right) and attenuation (to the left). This is accompanied by green and red LEDs (representing attenuation and gain respectively), with glow intensity indicating the amount of gain change.

Threshold (0 to -60dB) is the primary control for setting processing action. You also get three pre-threshold attenuation settings (-10, -20 and -30dB) and three similar gain boost options at the output. Rounding things off, the internal dynamic sidechain also includes a bass cut setting.

The most noticeable thing when you first load up Omnipressor is how the Function control works. It operates as a virtually continuously control, moving from gating (fully anti-clockwise) through expansion to a unity setting at 12 o'clock. As you move to the right, you pass through compression ratios (1.5, 2, 4 and 8:1) to full limiting (at a quarter past).

The final section is the dynamic reversal option. Here signals that exceed the threshold are attenuated and those below the threshold are boosted. This behaviour gets more extreme as you move the control around.

In use, dynamic reversal's combined boost and attenuation can achieve some crazy effects. We could almost remove the attack of many sounds with a fast Attack setting, tailoring the Release time to create a fading-in effect.

On other sounds, anything with pockets of silence could be processed to create very interesting pumping and swelling effects. We found this particularly effective on drums and loops, using the bass cut setting to even things out.

In more regular uses, Omnipressor is a really characterful processor. The flexible Attack and Release controls enable both snappy and gentle results, and the Limit controls offer a non-threshold-based option for fine-tuning the gain behaviour. On the subject of gain, we also very much liked the metering, with the LEDs providing swift, simple feedback.

It may not be a first choice for transparent processing, but Omnipressor offers a great palette of flavours. It's great to finally see this classic design in native plug-in form.