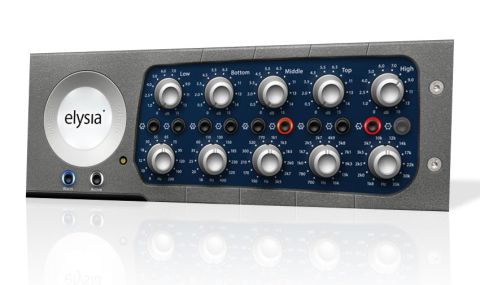 Not an essential purchase, but a very worthwhile indulgence for those in need of a highly flexible, brilliant EQ.

Hardware manufacturer Elysia is known in discerning production circles for its excellent studio dynamics and EQ processors. Some of its units have already been converted to equally excellent plugins, and now it's the turn of museq.

This five-band EQ and filter plugin (VST/AU/ RTAS/AAX) comes in Master and Mix versions, and for this review we're focusing primarily on the Master version.

museq's middle three bands are notch EQs with two Q settings available: Wide (1.3) and Narrow (0.5). The Gain controls switch between boost and cut modes, offering a higher degree of precision than a standard combined control with half of its range dedicated to each.

The highest and lowest bands can be toggled between shelving and cut modes, the latter effectively turning museq into a high-/low-pass filter with a small resonant peak around the cutoff frequency. Used purely as a filter, in fact, it sounds lovely and is equally effective for both mixing and creative uses.

For most electronic and pop mastering, you'd think this would be an undesirable feature, but the effect is quite gentle, so it can be good for bringing overly punchy sounds down a bit. Perhaps more usefully, though, it does a great job of softening individual mix elements to create a subtle sense of separation.

To keep the signal quality as high as possible, museq uses varying levels of oversampling, depending on the host project sample rate: under 50kHz it uses 4x, at 51-100kHz it uses 2x, and for rates higher than 100kHz, oversampling is disabled.

museq sounds, as the name suggests, notably musical and - to cut to the chase - absolutely superb. The quality of its output is perfectly transparent, but with a touch of warmth in the bottom end that doesn't suck out any punch or clarity.

Meanwhile, the calibration and design - lifted directly from its hardware parent, of course - make for a wonderfully flexible, smooth EQ that's perfect for adding life to any sound without introducing unwanted harshness.

Graphical EQ plugins with frequency analysers have all but become the norm in recent years, but many producers still appreciate the purer, listening-based approach of the old-school "knob array". We aren't about to take sides in this debate as it's very much a matter of opinion, but we will say that we really enjoyed using museq's traditional-style interface.

If we had any suggestions for improvement, they'd simply be to add input and output meters (as modern plugin insert paths are so easy to overload), and band solo buttons, which would be useful and creatively beneficial. Such minor points made, though, no matter what kind of music you're making, museq would make a truly luxurious (in both the price and quality sense of the word) addition to your plugins folder.