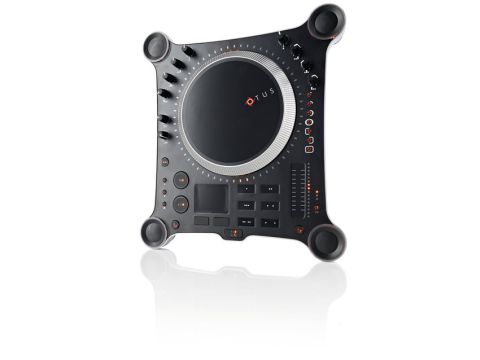 The Bruce Lee of DJ controllers - style, substance and power in one slick package.

Sometimes the future takes a long time to arrive. The striking OTUS DJing device was first previewed as long ago as the 2008 Winter NAMM show, where its space age design was a major talking point.

It may look like 'art for art's sake', but in actuality, every detail of the design is functional and serves a specific purpose.

First up, OTUS is both a multi-channel audio interface and a MIDI controller. Both elements can be used individually or simultaneously.

The reasoning is that OTUS can fit into all the current digital DJing paradigms, including internal and external mixing styles, while remaining compatible with all MIDI software.

In terms of technology, the six-channel audio interface can route two stereo tracks to a hardware mixer via RCA or digital (S/PDIF). The final stereo channel uses a headphone jack, perfect for monitoring and cueing tracks. This has its own volume control - exactly what you need.

EKS has programmed some clever templates for Traktor, Deckadance etc which reinforces the idea that all you need is one OTUS.

On the MIDI side, you'll find that a deck switch button is effectively a dual layer button. This swaps the controls between virtual deck A and virtual deck B through MIDI, while the deck lights change from green to red.

It takes a double-click to swap decks, or for a quick change you just hold the swap button for a second while you make a quick change. Also present on the deck is a dedicated knob (with graphic logo) which can act as a crossfader for the virtual decks.

In this case, we would have thought a horizontal fader would have been the logical choice.

"There are two touch-sensitive zones. Typically, the outer silver one will be used for CDJ-style pitch adjustments, while the top black area instigates vinyl-style scratch mode."

Many DJ controllers feature smaller platters, which for some DJs can feel like a compromise. Not here though. The platter is a full 7.5 inches and feels very much like a CDJ. However, the way audio reacts to its movements can vary depending on which software you use.

There are two touch-sensitive zones. Typically, the outer silver one will be used for CDJ-style pitch adjustments, while the top black area instigates vinyl-style scratch mode. For the record, even with ultra low latency, the scratch mode with Traktor was OK at keeping up but not totally perfect.

The unusual looking feet are actually another well though out design element. The positioning and rise allows OTUS to sit on top of a Technics deck, while a small hole underneath locks into the Technics' central shaft for added stability. Perfect for setting up in a club.

The MIDI editor is a nicely realised piece of software. Users can select the control to edit by touching the hardware or the relevant control on the OTUS graphic. Once selected it lights up and you are free to enter your own MIDI CC, Note, Aftertouch, Pitch or Program change command.

Overall, there is much to like about OTUS. It's very well thought out and does the job more effectively than any other digital controller I've tested. It balances the ergonomics and size of CDJ mixing while enabling you to access the potency of MIDI-controlled DJ software in fine style.