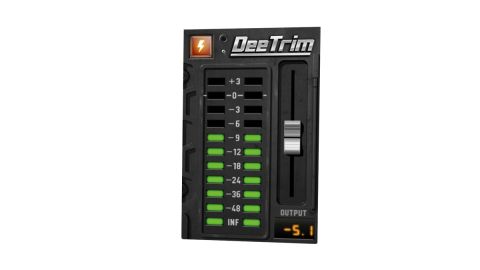 There are other plugins out there that can perform similar trickery for less, but DeeTrim's effortless operation and see-through sound make it well worth investigating.

DeeTrim is a dynamics processor that applies - we assume - a combination of compression and auto-levelling to keep the output signal at a user-specified volume, as long as the input peaks between 0dB and -16dB.

It's meant to be placed at the end of the processing chain of any sound that needs to maintain a consistent level in the mix, no matter what volume changes are brought to bear by other effects placed before it.

Stick it after an EQ plugin on a vocal track, for example, to ensure that the singer stays at the same output level even if you bosh them up by 14dB at 1kHz.

Consisting of nothing more than a Gain fader for setting the target volume anywhere between -12 and 3dB, and a Bypass button, DeeTrim does exactly what it promises to with an admirable degree of transparency.