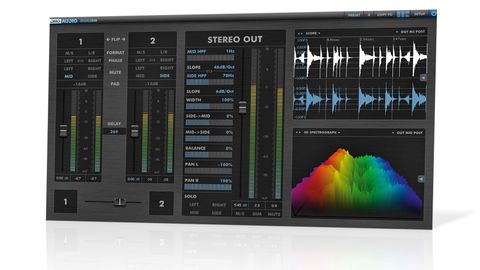 Superb signal analysis suite for high-end mastering and post production, with a useful but non-essential set of stereo manipulation tools bolted on.

For starters, it's capable of encoding a left/right signal into a mid/side signal, or decoding a mid/side format signal back to left/right, all in real time. You can also use it to increase the width of a signal up to 800%, or decrease it down to 0%.

There's a basic panner included, but you can pan the left and right channels independently across the stereo field, too.

Independent high-pass filters are onboard for the mid and side channels, with adjustable filter slopes from 6-48dB per octave (in 6dB steps). These are useful for tightening up the stereo image, although we're not sure why DMG didn't include low-pass filters at the other end.

As if all of that weren't enough, Dualism lets you add the side signal to (or subtract it from) the mid signal or vice versa. This functionality reminds us of Mathew Lane's DrMS, which is definitely a stronger stereo manipulation tool - but Dualism has a lot more going for it than just stereo adjustment trickery...

The most exciting aspect of Dualism is in fact its metering and analysis capabilities, which we'd say outshine its stereo tools.

The first of these is the graph-based FFT Analyser, which stands out as being very configurable (configurability being a theme through all of Dualism's analysis tools).

You can analyse two channels at once; zoom in on specific regions of interest using the mouse wheel; change the colour of the frequency graph to any hue you like; set the frame rate anywhere from a slow overview to extremely fast and responsive; set the graphical options to fill, outline or both; adjust opacity and more.

As an alternative to the FFT Analyser, the 1/N Octave view displays the same data in bars, rather than as a graph.

Dualism's colourful 2D and 3D Spectrograph views remind us of iZotope's Insight - and incredibly insightful they are, too, giving a complex yet intuitive representation of frequency and amplitude over time, again with detailed configuration and zooming options.

The Lissajous and Scope views provide stereo goniometer and waveform displays respectively, both at least as fast and smooth as any other such analysers we've ever seen. Then, in a similar vein, there's a Phase Meter, Bit Scope, Loudness Meters, Loudness History Graph, Phase Spectrum and RMS Analyser.

You can have up to two analysers open in the interface at once, thanks to Dualism's flexible GUI customisation setup, and any of them can be switched to full-screen mode at the click of a button for closer inspection. For broadcast applications, there's even a Dim switch on the output that attenuates the signal by 18dB.

Dualism is probably best suited to mastering and post production work and will quickly prove itself as a go-to for power users looking to find and correct problems in their audio, or adhere to loudness standards such as ITU 1770, EBU R128 or ATSC A/85.

It almost feels like overkill, but there's no denying the usefulness of having such a comprehensive range of tools in one plugin.