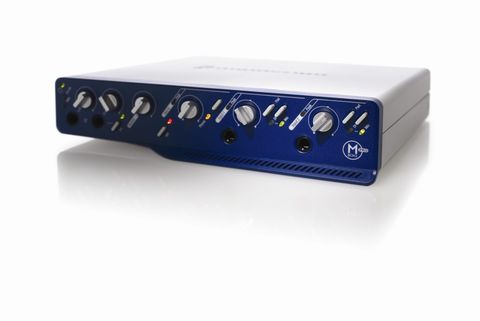 Combining great features and superb sound quality, this is a great interface.

Following several USB versions, the Mbox 2 Pro is the first to have FireWire connectivity. It features six inputs, including two mic level inputs with phantom power and two DI level inputs on the front panel. It has a built-in phono preamp for the turntablists among you, and S/PDIF in and out for your digital needs.

There are six analogue outputs, all available on quarter-inch sockets at the back of the unit. Two of these are used as monitor outputs, and have a dedicated volume control. There are BNC word clock inputs and outputs too, making it well-equipped for work in a video studio.

Most importantly, the Mbox Pro 2 can be powered entirely from a six-pin FireWire connection, though it can also run from an external power supply if you need it to. And lest we forget, the unit comes bundled with Pro Tools LE software and the Ignition Pack and Bomb Factory plug-in collections.

As with all Digidesign products, the sound quality of the Mbox Pro 2 is superb. There´s detail in abundance when monitoring, and we were more than satisfied with the quality of the input stages, too.

The FireWire interface handled everything we threw at it, including six outgoing audio streams at 96kHz. One thing to watch out for, though, is that it won´t work correctly on a FW800 buss - the Mbox Pro 2 is rated for FW400 only.

One of the handiest features of the Mbox Pro 2 is the provision of two headphone sockets on the front panel. The first is hardwired to the monitor outputs, but the second can be configured to give you outputs 3-4 at the press of a switch. This means you can set up a separate mix for your vocalist while you´re monitoring using the regular output mix.

This is a godsend for users who are used to sharing one mix while recording. The headphone outputs are loud, and we preferred the sound of them to the headphone output on our Apogee MiniDAC, which was quite a surprise.

We had no trouble running the 48V phantom power facility on the Mbox 2 Pro when it was connected to our MacBook. We were expecting to have to use the supplied power supply to top-up the current, but we were wrong.

This effectively means that the unit is ready for recording on the move straight out of the box. With a fully charged (and FireWire-equipped) laptop and an Mbox Pro 2 you´re able to record high-quality audio anywhere you like.

Speaking of which, although the unit supports the use of higher sample rates (up to 96kHz), and is happy to output a clock signal up to that rate, it won´t accept clock rates higher than 48kHz at its word clock input (or S/PDIF input). How much of a pain this is depends on how often you run high sample rate sessions that require an external clock.

Apart from the drawback of not being able to use it on the same buss as a FW800 drive, the Mbox Pro 2 is an outstanding audio interface. It sounds terrific, just as you´d expect from a company with such a long and revered history. What´s more, the fact that it runs perfectly well from the power supplied by the FireWire bus means it´s ideal for the engineer on the move.

The phono preamp is a nice touch, although we're sure we're not alone in thinking it would have been more than handy to have two - something for the Mbox 3? No matter; throw in the Pro Tools LE software - plus a pair of MIDI sockets on the back panel - and you have a superb package for anyone looking to upgrade their existing Mbox.

As if you´re starting out on the road of professional-level audio recording, you must check this out.