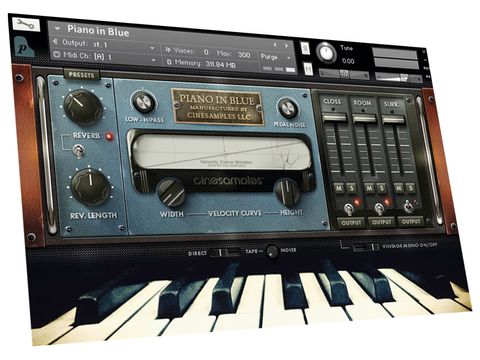 There was a time when recreating the sound of a piano with just a sampler, rather than a synth, was deemed 'real enough'.

However, bigger and cheaper RAM, alongside hard-disk audio streaming, has introduced an ongoing quest for the ultimate unlooped, multilayered, multi-sampled piano library.

"The piano's low-high balance can be tweaked using a combined low/high-pass filter control and the programmable velocity curve can be tailored to your playing style."

There's also been growing interest in pianos with individual character, and Piano In Blue is one such creation. It came about with quite a bit of luck.

The studio where the recording sessions took place had already hosted its last proper recording date, but Cinesamples discovered that the piano in the corner - a Steinway Model D - originally came from the legendary CBS 30th Street Studio, along with a pair of Neumann M49 mics - the same kit that was used on the Miles Davis classic, Kind Of Blue.

All controls for Piano In Blue are accessed from one, pleasantly retro-looking interface. The most important of these allow you to enable and adjust the relative levels of the three different mic positions - two Neumann M49s near the lid of the piano, two B&K 4007s at its tail and two Sennheiser MKH20s at a distance.

Flicking another switch enables you to select similar mic positions, but this time recorded to a Studer A800 MkIII 24-track tape machine, and with adjustable tape noise level. Pedal Noise level is also provided as a dedicated control.

The piano's low-high balance can be tweaked using a combined low/high-pass filter control and the programmable velocity curve can be tailored to your playing style.

A very welcome extra is the provision of a series of impulses taken from Bricasti's fantastic M7 reverb hardware and this helps make Piano In Blue very self-contained in sonic terms. While the recording doesn't capture the actual sound of the original CBS studios, Clinton Recording Studio's main room is very highly regarded in its own right.

Overall, Piano In Blue is an absolute pleasure to play and use and, unlike some brighter piano libraries, fitted well within the mix of various tracks across a range of genres.

The option of using the 'to tape' version is a real bonus, though it does come with a dose of audible saturation distortion during more strident playing. However, this for many will be part of its appeal, and make Cinesamples' creation a bit less 'sensible' than a number of its peers, providing real warmth and heaps of 'vibe' when required.