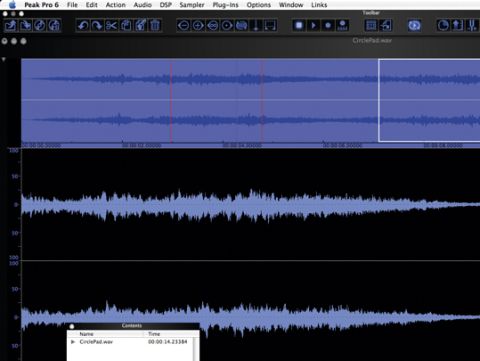 Peak Pro is probably the best audio editor available on the Mac, and version 6 maintains its very high standards.

Bias Peak is a well-crafted, fully developed audio editor, exhibiting a level of maturity that Mac users would be hard-pushed to find elsewhere. However, that power comes at a price: £380 for the Pro version and a whopping £800 for the XT bundle. The LE version is a lot cheaper, though, at £89.

While the XT package is the most impressive, its core program is identical to that of Peak Pro, so we'll focus our attentions on that version here.

Peak Pro comes bundled with a wealth of goodies. There is, of course, the program itself, along with SoundSoap LE, Bias' excellent noise remover; WireTap Pro, an audio capture tool; a bundle of 32 VST effects from Maxim Digital Audio; and the wonderful SFX Machine LT plug-in, which contains nearly two dozen unusual effects.

Third-party AU/VST effects and instrument plug-ins are supported too.

Additionally, you get a suite of analysis tools in the form of Bias Reveal LE, a gorgeous four-band EQ, Bias Sqweez dynamics, and the dynamite Vbox plug-in matrix.

As if that wasn't enough, AMG's ONE sample player is included, along with audio files from PowerFX, Hollywood Edge and Sound Ideas. Believe it or not, the XT version gives you even more, adding SoundSoap 2 and SoundSoap Pro, along with the Master Perfection Suite.

If you're an experienced Peak user, you'll notice immediately that the interface has been given a bit of spit and polish for this version. Peak has always had a reputation for being very easy on the eye and, more importantly, easy on the brain, and that approach is maintained here.

The most useful options are available from the toolbars in the customisable interface, and we were thrilled to see that, for example, our Frontier Design Tranzport controller is supported out of the box.

Speaking of which, Peak offers a vast array of crossfading tools, along with custom default fades that can be saved and applied to other projects.

The DAW also provides loads of export options, and all the expected file types are supported (including WAV, AIFF, SDII, FLAC and MP3). You can drag and drop between Peak and iTunes, and export playlists directly into the latter, too. Very cool indeed.

Metadata tags can be written for many file types, and you can create and upload podcasts from within Peak itself. It almost goes without saying that CD-Text information, index points and PQ sheets are supported.

Peak's advanced sample editing and looping tools make it an essential purchase for OS X-based sample providers and sound designers. There are functions designed to work out the BPM of an audio clip, zeroing in on loop points and crossfading between loop markers.

What's more, you can embed root note data, pitch range information and more into your file - an area in which some other audio editors fall short. This makes quick work of mapping notes in your favourite sampler.

In addition to this standard fare, there's the nifty Loop Surfer, which mines a length of audio for rhythmic loops of a pre-ordained BPM. Plumbing a two-track drum sample through Loop Surfer yields a wealth of dead-on loops.

Similarly, Perpetual Looper is designed to take the donkey work out of looking for suitable loop points in non-rhythmic, pitched samples. Just give Peak the approximate pitch range of your material and it will attempt to create a seamless loop for you.

This works remarkably well on traditionally difficult sounds such as brass, though for some sources, you might have to play with the parameters a bit to ensure a natural sounding loop. It's not quite good enough to replace for the lamentably OS9-locked Infinity, but it does help reduce the tedium of finding good loop points in challenging material.

Peak has been around for years now, but it's showing its maturity rather than its age. It's chock-full of little details that demonstrate its creators' willingness to listen to their customers, and offers a great deal of long-term practical use. We've witnessed Bias staff seeking out feature suggestions on various online message boards, and that kind of dedication shows every time we use Peak Pro.

The program was perfectly stable and almost entirely glitch-free during the review process, with the only exceptions being a minor graphics bug in Vbox, and the authorisation app freezing a few times on our Leopard machine (though we hasten to add that it worked in the end).

So, is Peak Pro 6 good value for money? Without a doubt - particularly if your audio editing extends into commercial sound design or mastering. Peak Pro will save you time, money and stress - it's a sure winner that just gets better with each incarnation.

Listen to what some of the toys in Peak Pro 6 can do: