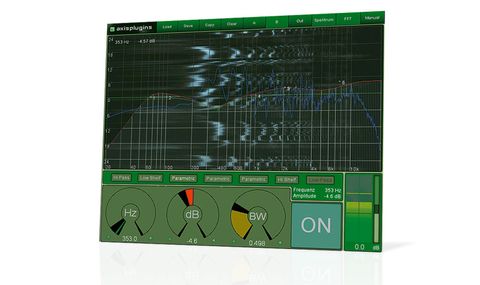 A simplified alternative to Track EQ that doesn't add hugely to the Axis Plugins bundle, but doesn't hurt it, either.

There are now ten plugins in the Axis Plugins range, and subscribers get all of them for a €39 annual fee. EQ is already pretty well represented in the lineup by the excellent Match EQ and Track EQ, so what does 3Q bring to the table?

The engine at the heart of 3Q (VST/AU/RTAS) uses the same algorithms as Track EQ but puts it behind a more immediate, accessible and, yes, simplified GUI. It offers seven filters/bands, which are fixed, unlike the semi-modular approach of Track EQ. These comprise low- and high-pass filters, low- and high-shelves and three fully parametric bands with bell curves, all with up to +/-24dB of gain.

Individual filters/bands are accessed via the buttons below the main display: select one and the three large rotary controls switch to reflect its frequency, gain and bandwidth. The EQ settings can be edited using these knobs (which are flanked by tiny + and - buttons for making small incremental changes), or by dragging the seven nodes around in the graphical display.

You can just about tell at a glance which bands are active and which aren't, as the selection buttons for inactive bands are a slightly darker shade of grey than those for active bands. Inactive bands are completely inactive, incidentally, making no demands at all on the host CPU.

Like Track EQ, 3Q features two workspaces, A and B, enabling you to set up and compare two EQ curves at a time, each with its own output trim. Helpfully, the settings from one workspace can be copied into the other.

Also taken from Track EQ, the display hosts a momentary FFT frequency spectrum analyser and a 3D spectrograph (see FFT and Spectrum Analyser). These can analyse the incoming unprocessed signal or the processed output.

3Q is futuristic and technologically efficient - a clinical, surgical EQ designed for precisely and accurately sculpting audio signals into the exact shapes you're after without any inherent colouration. Although we wouldn't describe it as the most musical EQ in the world, it does what it does very well indeed, sounding smooth, clean and transparent.

The easiest way to use it is by manipulating the graphical curve, of course, enabling simultaneous adjustment of both the frequency and gain axes by dragging nodes, with bandwidth widening/narrowing accessed via the Alt key modifier.

Another advantage of the graphical editor, and something that partly explains 3Q's lack of musicality, is that the Frequency knob is linear in its gradation. This means that the lower the frequency being adjusted, the coarser the precision - a more musical EQ would have a logarithmic gradation, resulting in a more even sweep. Accurately setting 3Q's high-pass filter using the knob is almost impossible.

While 3Q is a very high-precision EQ that delivers great results, there's not really anything here that sets it apart from the many other surgical EQ plugins out there. And with Track EQ covering the same ground and more - albeit in a less user-friendly interface - it could be suggested that this isn't a vital addition to the Axis Plugins collection. However, that doesn't detract from its undeniable capability as a quick and easy go-to EQ.