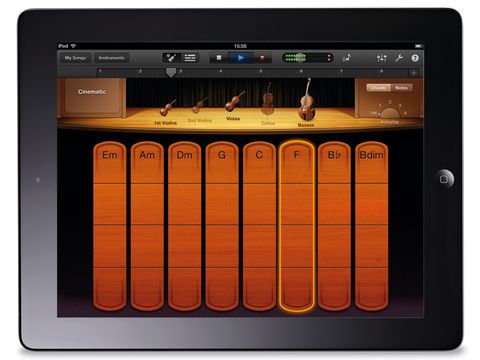 Everyone from total noobs to pros should snap up this slick, fuss-free musical notepad.

For a mere point release, there's an extraordinary amount of new stuff in the latest version of Apple's amazing mobile DAW.

For many, the two most welcome additions will be the Note Editor and Track Merge. The former should have been there since day one, really, being the piano roll MIDI editor we've always wanted in GarageBand for iOS. Notes can be drawn in, deleted, lengthened, moved around and adjusted for velocity, and instrument choice and articulation for the new Smart Strings can also be selected per note. It all works as well as such things ever can on a touchscreen, although a solo button in the editor would be useful.

Track Merge, meanwhile, enables you to bounce up to eight tracks down to a single audio track. While the implementation is extremely basic, it does at last mean we can go beyond that stingy eight-track limit.

Four synth Smart Basses and four synth Smart Keyboards (all of which sound great, if a bit generic) boost the existing instrument roster, while Smart Strings introduce a whole new category. Smart Strings comprise violins, viola, cello and double bass, each with three playing articulations: pizzicato, staccato and legato (these can also be controlled by the modwheel if you hook a MIDI keyboard up via the iPad Camera Connection Kit).

iCloud is now supported, enabling effortless sync between all your iOS devices. With YouTube, Facebook and SoundCloud uploading, you can also share your music with friends, bandmates or the whole internet.

The headline feature for us, though, is Jam Session, with which up to four iOS devices running GarageBand 1.2 can sync to a specified host (the Bandleader), who also aggregates all recordings onto their iPhone, iPad or iPod touch. It's insanely good fun and genuinely productive in terms of 'serious' music-making - in a sketchbook kind of way, at least.

For less than the price of a pint, GarageBand for iOS was already a must-have, but 1.2 makes it even more essential.