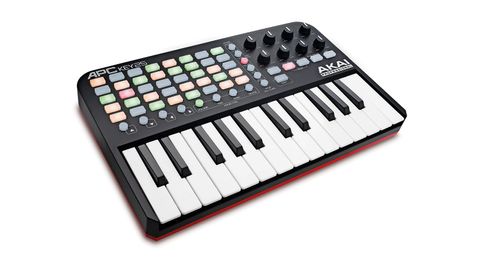 The APC Key 25 is a great little keyboard/clip/scene launching combo, that will fit in any laptop bag.

There are a lot of little MIDI keyboards around, designed to fit into a backpack alongside a small computer, but this new one, the APC Key 25, is unusual because it's really the only Live-specific mini-keyboard around, and also because it has so many buttons on it!

As well as the basic 25 keys, it's got a 5x8 grid of clip launching buttons, plus scene launch buttons, and eight knobs as well. That's the same amount of clip control as you get with the recently released APC40, for example, although here we have fewer knobs, and no faders.

Of course, these buttons aren't velocity-sensitive, and are three colour only - the usual amber, green, and red. But look at the size of the thing; what would you expect?

Similarly, the Key 25 doesn't have a fantastically playable keyboard, but there are limitations to what's possible at this size and price. It's kinda squishy feeling, but definitely good enough to get an idea down, or to use onstage for simple melodies or bass parts.

Some of you will wish for pitch and mod wheels, but the drive for a smaller footprint has squeezed them out. More positively, we liked it that Akai has kept the play and record buttons, and the all-important Stop All Clips button.

Akai makes Push as well, and the APCs are at the other end of the spectrum in terms of price and build. Push is designed to have some longevity, and it's expandable - new features are added through Live updates.

The APCs, however, are more like 'fire and forget' devices. You spill your drink on it, you drop it, you lose it after the gig... Not such a big deal.

When we were playing around with the Key 25, we started to see it as a two-handed operation where you'd be playing keyboard parts with one hand, and then reaching up and launching clips or scenes with the other.

It works pretty well like that, as long as you can remember what each clip or scene contains - or else you can look at a computer screen, play keys and press clip buttons at the same time!

Once we realised that the Key 25 had the same footprint as an 11-inch MacBook Air, we liked it even more. This is a great combination for lightweight, low-impact gigs. Just add some in-ear headphones, and if you need a soundcard, try something like the NI Traktor Audio 2, or the Apogee One. That's all the hardcore travelling computer musician needs.

The APC Key 25 is oriented to the mobile musician who needs a bit of keyboard action as well as a healthy amount of clip and scene launching.

It could be a real godsend to have so many buttons available. We think this just became our new hardware recommendation for pro clients who are travelling super-light!