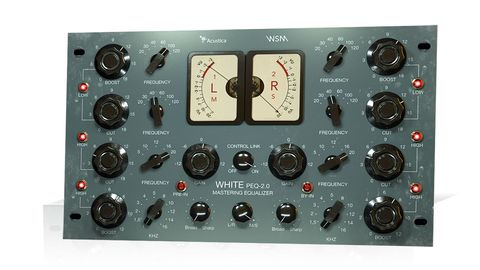 A fabulous sounding Pultec-style EQ plugin that loses points for heavy CPU usage and clunkiness in some areas.

Acustica Audio is best known for its powerful convolution-based hardware emulation system, Nebula, but over the last couple of years its Acqua line of plugins has also garnered considerable praise.

These are individual plugins using the Nebula engine and swapping out the generic Nebula interface for bespoke hardware-inspired graphics.

This custom-built mastering-orientated unit adds stereo to the traditional three-band EQP-1A design - low shelf, mid-to-high peak with adjustable bandwidth and high cut - as well as a host of further enhancements.

Most obviously, the dual low shelf (one cut and one boost, up to 18dB for each) here features independent frequency selection. The notched frequency settings on all three bands are extended (six for Low, five for High cut and 11 for the mid/high boost), and there's global EQ bypass and an output Gain (+/- 12dB) control.

Plugin-only enhancements comprise individual band and preamp circuit bypass, channel Control Link and mid/side operation. The preamp circuit has little sonic impact, although it does increase CPU hit, so you may find yourself bypassing it more often than not.

White EQ comes in two separate versions - 'regular' and zero-latency - and two skins: one based on a Pultec theme, and the other closely recreating the White Sound WSM PEQ-2.0.

White EQ is surprisingly flexible. Although its general tone shaping is smooth and broad, it's also able to get more specific with the low end and better tailor the midrange than a regular Pultec emulation.

This makes it even more effective on the traditional Pultec targets of kicks, snares and basses, thanks to its much greater precision. The high frequency settings also tread very familiar sonic territory, but again, it's great to have more frequency choice when turning up that classic top-end peaking filter.

On the downside, like Nebula, White EQ is a CPU hog, particularly the zero-latency version; and although bypassing the preamp or overall EQ alleviates the hit somewhat, bypassing individual EQ bands doesn't, which is frustrating.

As well as that, a couple of processes (switching skins and authorisation) involve editing or copying files within the plugin folder. Similarly, switching to the zero-latency version requires the instantiation of a new plugin rather than simply flicking a switch - pretty inconvenient in this day and age.

What we unreservedly love about White EQ, though, is the sound. This truly is as lush and realistic as Pultec emulation gets, and although the CPU hit precludes simultaneous use across many channels, as a mastering EQ (which is its stated remit, let's not forget), it's awesome.

Overall, then, fantastic sound quality and lifelike graphics, held back slightly by a sometimes clunky user experience, make for a very good though not quite brilliant plugin.