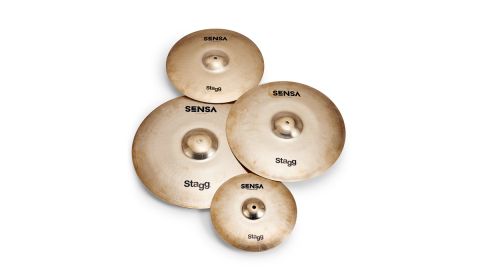 The Oceans are a nifty addition to the already diverse Sensa range of normal and effects cymbals - a set of splashes and crashes that can be played by hand.

When we reviewed Stagg’s Sensa range in 2015 it was the company’s first new series in 10 years.

The Sensas have expanded to include effects cymbals such as Stackers, Orbis and China types. Now these new Ocean additions - two splashes and three crashes - are bendy cymbals that can be played by hand, or stick, brush, rune, mallet etc. We have four of the five to review (we’re just missing the smallest 10" splash).

Like all Stagg Chinese-made cymbals the Sensas are formed from B20 bronze alloy. However, these are effects cymbals and their special character is that they are malleable and playable by hand. The bendiness is achieved by applying unequal lathing - thus introducing different tension - to the top and bottom of each cymbal.

Stagg’s Eric Tang explains: “We’ve lathed a few more layers on the bottom side to create a fluid shape and more vibration.”

Unsurprisingly, the Oceans are thin, lightweight and exhibit a slight droop, the splash in particular. Strike any of the cymbals and they wobble. Stagg calls this Supreme Vibration, a flexibility in each cymbal that reassures you it won’t crack, but will absorb the energy and go easy on your bare hands.

As it happens, we’ve been playing a lot of folk/world percussion recently, and these Oceans are doing just the job. Smacking normal thin crashes with bare hands is a dangerous business. With the Sensas you can go at it with relative impunity, though you still need to watch out for the sharp edges.

Since the cymbals are thin they are, inevitably, fast reacting, peaking very quickly before departing the sonic landscape cleanly. Yet they are still full sounding. You can build up a wash with the 18" and 20" crashes in particular, while the smaller 12" splash is great for pithy jabs.

The 16" lies in between. It’s a crash but it’s fast, spiky and shrill, while the 18" and 20" are majestic, trashier, deeper... gongier. Play them with a stick and it’s another story.

The 18" and 20" are harsh - explosive, and bright-edged. The 18" could almost be a China-type smash. The 16" and 12" are less changed by stick or rune playing since you probably won’t strike them as hard as the bigger crashes. All four have lively, amenable and tuneful bells.