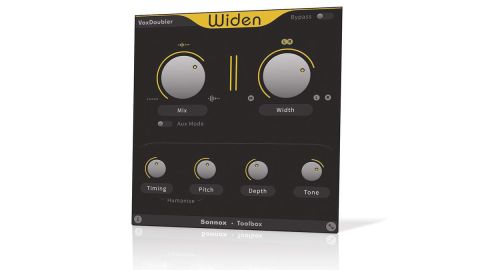 Deployed with due care and attention, VoxDoubler does an astonishingly good job of double-tracking vocals.

Sonnox’ new Toolbox series of plugin effects aims to be more approachable and task-specific than its regular output.

The first in the range, VoxDoubler (VST/AU/AAX), is a vocal doubling processor for conjuring “realistic double-tracking effects from a single vocal performance.” It actually comprises a pair of separate plugins: VoxDoubler Widen and VoxDoubler Thicken.

VoxDoubler Widen applies its doubling effect by generating two new mono voices and panning them to either side of the source signal, while Thicken serves up a single stereo voice layered over the source.

Sonnox says that the Toolbox range puts ease of use at the top of the agenda, and VoxDoubler certainly supports that claim. Both plugins share an almost-identical array of just six adjustable parameters, the only difference between them being the top right knob.

For Widen, this is the Width dial, setting the panning depth for the two mono doubled voices, from dead centre at 0% to hard left/right at 100%. With Thicken, the knob handles Stereo Spread, ranging from replication of the source signal’s stereo image at 100%, through mono at 50% to full inversion of left and right at 0%.

Beyond that, the two plugins are the same, operationally speaking. The Mix knob controls the volume of the doubled vocals from silent at 0% to level with the dry signal at 100%.

This isn’t a standard dry/wet mix control, then, with 100% dry at one end and 100% wet at the other, but the Aux mode switch sets the output to 100% wet for use on an auxiliary return channel, and a pre-fader auxiliary send can be used if, for whatever reason, you need to make your doubled vocals louder than the dry signal. The human touch

Central to the realism of VoxDoubler’s faux doubling, the two Humanise parameters enable emulation of the organic fluctuations and differences between vocal takes that necessarily occur when recording a singer.

They’re self-explanatory, really. Timing and Pitch each dial in natural variation in their titular aspect of the ‘performance’. At 0% (and with Depth also at 0%), Timing yields a super-tight double that actually sounds too close to the source to be convincing; crank it up past 20%, though, and the effect is incredibly authentic, until at around 70% it starts to feel more like a delay, which has potential for creative use on an auxiliary return. Indeed, a video on the Sonnox website shows it creating predelay in front of a reverb plugin.

The Pitch knob applies the same organic variance to the pitch of the doubled vocal, from subtle wavering at low settings to audible detuning at the upper reaches.

Adjusting the two Humanise controls (see The human touch) applies timing and pitch variation to the double, while the Depth and Tone knobs change the character of the doubled vocal.

Depth uses a high-shelf filter and a fixed delay to simulate an increase in physical distance between the double and original, separating them in the mix.

Even at 100%, this separation is, quite rightly, gentle - it isn’t meant to be an actual filter delay, after all. Tone is rather more overt, using a tilt EQ to brighten or darken the double for mix positioning and creative colouration.

It goes without saying that VoxDoubler is destined to live or die by the authenticity of its double-tracking emulation. Thankfully, it sounds fantastic – all but indistinguishable from the real thing when set up and mixed in carefully, in fact - and the two very different styles of doubling give it plenty of fundamental sonic scope.

Secondary to that, the interface is a joy to use, being admirably simple and intuitive. On the downside, one plugin with a Widen/Thicken mode switch would be preferable to two; and the CPU hit is impressively high, although that reflects the quality of the effect.

Ultimately, for quick and easy vocal (and other sources, if you’re feeling experimental) doubling, VoxDoubler is more than just a second-rate substitute for calling your vocalist back in after the event.

It’s capable of delivering such convincing double-tracking that you might even find yourself opting for it over the hassle of recording the real thing.