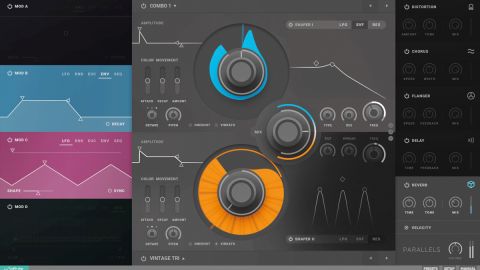 Parallels manages to combine old and new into a package that goes beyond the usual virtual analogue plugin territory.

Given that so much of its output is dedicated to emulating the sound of both modern and classic hardware, it’s interesting to see that the company’s latest instrument is based around samples rather than pure modelling. So, unlike Heartbeat or Modular, the primary building block in Parallels is previously created audio content.

This raw material comes courtesy of Johan Antoni of Stockholm synth emporium Syntotek. In fact, it was after being inspired by synths like the Korg 800DV and Oberheim Two Voice (that feature a straightforward, but flexible, dual voice architecture) that Johan began work on an early version of Parallels. Luckily, with so many synths at his fingertips, the raw material covers a wide range of sources from digital and analogue classics (hard-wired, modular, FM, physical modelling and other types) as well as stacked and environmental sounds. Altogether there are 97 multi-sampled sounds in the waveform list, but as we’ll see, this is only the start…

Parallels employs a dual architecture for its sound engine meaning that, apart from the four global modulators and effects, the two sonic layers are independent. Things begin in the Source section where you start by selecting a waveform. These are generally more than just the single cycle waves you’d find elsewhere. So selecting ‘Ana Sweep’ delivers a great- sounding analogue low-pass filter sweep (even before any onboard filtering or other processing is added). The only issue here is that, although multi-sampling is used for consistency of tone and timing across the keyboard, I saw some level differences in one of the note ranges on this particular source. Luckily, having tried a few others, this seems to be an isolated case. It was a little disappointing but hopefully we’ll see an easy fix in a subsequent update.

So far, so standard, but that’s before you witness the sound generation capabilities at the core of this synth. The example above makes use of Oneshot mode for source playback, and with this engaged, Parallels is limited to conventional sample player duties. When turned off, each source employs wave-scanning instead of linear playback. This takes the sample as the raw content, but instead loops small sections of it. This loop section can then be moved manually using the large Color knob, or under control of the dedicated two-stage Color Envelope. This use of the underlying audio often completely changes the sound of the source ‘oscillator’, allowing wide-ranging tonal variation just by moving the Color control.

Like the rest of Parallels, the modulation options include both the familiar and unconventional, with influence once again coming from the world of modular synthesis. Many parameters can be modulated, with the ability to mix the signal from two mod sources simultaneously. However, routing changes are only reflected in the next triggered note, and it is sadly not possible to modulate Mod Pod parameters. There are four modulation slots, with each being able to host one of the five modulation types. LFO is a simple but effective, tempo-syncable, low frequency oscillator with control over both rise/fall balance and shape. Speed runs from 0.1Hz to low audio rates. RND is a random modulation generator, which makes use of ‘rain’ to visualise the effect of its parameters. Although this looks nice, you’ll need to use your ears to get a sense of the resulting complex modulation signal. EUC, a Euclidean Sequence Generator, creates gate signals based on a shifting pattern of beats determined by the fill, steps and shift parameters. The beauty of this form of pulse generator is that it responds well to random tweaking, yet produces musically useful results. The final two modulators, ENV and SEQ, return to more conventional territory with an ADSR envelope and tempo-locked level/gate sequencer.

Unlike traditional wave-sequencing systems, the loops are often not completely smooth - and not dissimilar to the way in which some granular-synth systems work - and as such can lean toward the glitchy when little other processing is used. One addition that would’ve been welcome here is the ability to override default options and create custom loop lengths. This could even have been taken further and allowed for tempo-synced loops (that would make a positive feature of problematic loop transition points). That said, part of the design ethos of Parallels was its stripped- down approach to sound creation, so this is perhaps an acceptable compromise. This section also features a conventional ADSR amplitude envelope, and controls for octave, pitch and vibrato. You’ll also notice that the pitch knob has a greyed-out ring around its perimeter. Any controls shown like this have the ability to be modulated by the separate modulation section. More on these in the ‘Mod Pod’ box.

The Shaper section comes next, and once again this takes a slightly unconventional approach. Clearly inspired by the software emulations of some Buchla gear in their Modular range, Softube have chosen a ‘low pass gate’ as their default filter. For our purposes this amounts to the inclusion of a resonant low pass filter with variable Slew (the response rate of any changes to the cutoff). Here you’ll also be able to find a state variable filter (fully adjustable between low, high and bandpass responses and popularised in early Oberheim designs), plus a three-band Resonator bank.

Lastly, after passing the source mix (balance) control, both layers are routed into the effects section. Once again, simplicity is the key, with each effect providing only two editable parameters alongside a mix knob. This generally works well, though more flexibility in the delay and reverb sections would be welcome -  we particularly missed having stereo delay modes - though the ability to route modulation sources to parameters is a big plus.

There are a few small sample issues - the limitations in source looping can be frustrating, and tiny fonts - but these aren’t dealbreakers.

All told, in a world of ever more feature-laden synth plugins, Parallels tries to keep things relatively simple, and yet, in sonic terms at least, it does manage to cut its own path. This, along with the healthy complement of factory presets, would make the synth a good addition to any musician’s toolkit.