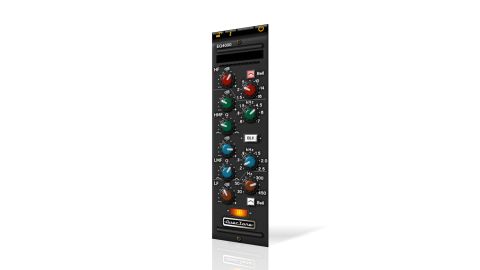 Despite its basic GUI, EQ4000 is decent emulation of an SSL E Series EQ, at a knockdown price.

OverTone DSP produces a number of analogue style EQ, dynamic and reverb plugins inspired by classic designs from Pultec, Fairchild, API and SSL, including our own Program EQ CM and AF2-10 CM EQs.

Its latest release, EQ4000 (VST, VST3, AU, AAX), once again takes its lead from a famous bit of kit, namely the EQ section of SSL’s E Series channel strip. This EQ is famous for its direct, powerful sound, and over time has proven particularly popular for pop and rock production. It’s also a great tool when you need an EQ that can transform sounds (such as drums), but in a musical manner.

The original hardware comes in two key revisions (typically called ‘brown’ and ‘black’), which is nice to see in an affordable plugin. However, EQ4000 doesn’t include the high- and low-pass filters of the SSL, which is a shame.

So, what we have is a four-band design - two fully parametric mid bands flanked by high and low shelves that can be switched to bell shapes with fixed bandwidth. The bands’ frequency ranges create considerable overlap, and a quick check reveals that bands combine in an additive way to help create those powerful SSL settings.

Sound as a pound

It has to be said that EQ4000 won’t win any beauty contests. What’s more, a quick look at the presets reveals a paltry choice of six. A/Bing with a number of other emulations reveals a very similar and familiar sound, with the ‘brown’ setting less powerful but still capable of some serious tonal shaping. This can include adding body to kicks, snares and bass, and enhancing the midrange presence of guitars and vocals.

Although powerful, the reasonably broad curves mean the ‘brown’ option never sounds honky or tinny. Switch over to the ‘black’ mode and things are noticeably sharper at high Q settings, which is particularly good for kick and snare tailoring in the lows and low mids. In this mode, the extended frequency range of the HMF band (see Brown vs Black) really comes into its own for adding focused higher frequencies - crisping up snares, for example.

When SSL updated the original E Series EQ circuit, the only visual distinction was the LF band knob colour, which changed from brown to black. Alas, this simple change led many to believe it was solely the LF band that had changed, when in fact all bands of the EQ had been modified in some way. The black knob design exhibits the following key differences. Firstly, the maximum gain is 18dB rather than 15dB. Next up, the bell options for both LF and HF bands have slightly narrower Q, while the narrowest Q settings of the LMF and HMF bands are considerably narrower than their predecessor. Finally, and often overlooked, the frequency ranges of each band are bigger. This is particularly obvious for the HF band (now topping out above 20kHz) and the HMF band (now operational up to 9kHz). But the most handy change is the LMF band, which now works down to around 145Hz, dovetailing excellently with the sharper, bell-shaped LF band.

When it comes to cutting frequencies, the ‘black’ option is also capable of some reasonably surgical behaviour, and looking at things on the frequency analyser, cut and boost have virtually identical profiles, corresponding with the original hardware. Nevertheless, looking at the curves on the analyser does remind us that this EQ is nowhere near as surgical as a modern digital EQ.

OverTone’s EQ4000 may not be the prettiest or best-equipped E Series EQ emulation, but it’s ludicrously cheap, has a minimal CPU hit and sounds very close to the original hardware. It forms an excellent companion to their existing DYN4000 plugin and adds another desirable plugin to OverTone’s range.