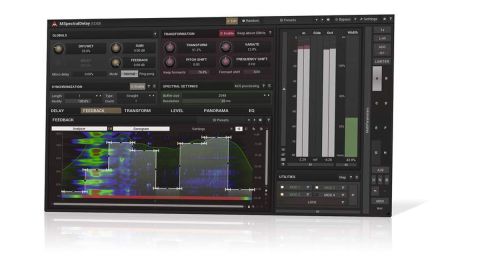 Whether you stick with the Active Presets or venture into Edit mode, MSpectralDelay is an immense sound design plugin.

Built within the same highly developed semimodular processing, modulation and metering framework as its stablemates, MSpectralDelay is a delay plugin (VST/AU/AAX) that gives the user total control over delay time, feedback and other parameters on a per-frequency-range basis.

For example, you could set up one particular echo treatment for the hi-hats in a mixed drum loop and another for the snare; or spin out an envelope follower-modulated frequency band within a vocal, with different feedback levels and even pan positions for smaller frequency ranges within that. And that’s really only the beginning...

Melda’s very welcome Active Presets (see Active duty) are worth the price of admission alone, but the meat of the plugin is found in Edit mode, which turns it into a ridiculously deep delay design toolbox that can either be used as is, or macro-assigned to make your own Active Presets. These can only be saved into the general preset library, however, not the Factory Active Preset panel, which is a minor shame.

The delay itself is controlled using a series of extremely flexible envelopes in the main multi- tabbed graph display. These put input frequency on the X axis and Delay time percentage (the base delay time ranges from 10-1000ms unsynced, or 64/1 to 1/256 synced with multiplication up to 64x), percentage of base Feedback or feedback Pan position on Y, enabling free mapping of values for each parameter across the frequency spectrum.

A feature of several Melda plugins, Active Presets are fully macro-assigned patches, accessed via a menu in a dedicated panel. Each one is effectively a plugin in its own right, boiling the many involved parameters of Edit mode down to a small, tidy set of controls that define a particular processing style or technique. They’re intended for “beginners” (although the lack of parameter presets within each Active Preset rather contradicts that notion), but experienced users will get just as much mileage out of them, either deploying them as they are, or tweaking them in Edit mode.

MSpectralDelay comes with 20 Active Presets, from the cosmic Space Disco and Black Hole to the bonkers Chatter Box and Damaged MP3. It’s a brilliant collection of modules, and even if you never hit that Edit button, they’ll get you more than your money’s worth out of the plugin.

The Transformation and Level graphs, meanwhile, remap the frequencies and levels of the feedback signal on the X axis to new output values on Y, with formant shift and preservation amount both adjustable for the former. The rightmost graph enables drawing of an EQ response curve for final shaping of the delay signal - and with so much untamed craziness going on prior to that, you’ll probably need it.

Envelope editing is assisted by a spectrum analyser and sonogram within the graph, and envelope shapes can be stored for recall.

This being a Melda plugin, one page is barely enough to scratch the surface of MSpectralDelay’s capabilities. All the usual Melda goodies are in place - parameter morphing, snapshots, the aforementioned macros (called Multiparameters) and, most importantly, their staggering modulation system, with which every bit of MSpectralDelay - right down to individual envelope breakpoints - can be animated by the onboard LFOs, envelopes, followers, randomisers and more.

Make no mistake, those who dare to stray beyond the Active Presets will discover a delay design system so powerful and complex it’ll make them giddy - even if the endless popouts, sub-panels and customisation options of Melda’s ever-impressive core architecture can get a little overwhelming at times.

That is indeed what the Active Presets are for, though, and anyway, such workflow niggles don’t alter the fact that MSpectralDelay is an incredible time-and frequency-bending sound design tool for the creation of intricate multilayered echoes, hyper-real ambiences, mad pitchshifting acrobatics and description- defying spectral effects. Stunning.