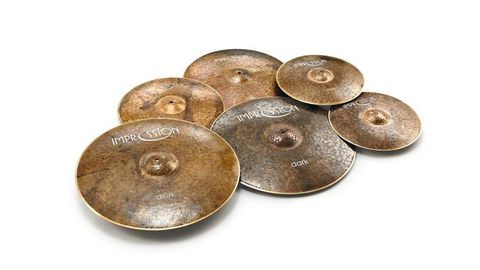 There’s plenty to like about the Impression Dark Series and you should find a sound for you, however, heavy hitters should approach with caution.

With an enormous 12 series’ already in the line-up, styles range across the board from Traditional, Jazz and Dry Jazz to Rock, Hard and Trash. This issue, we get hands on with the new Dark Series.

There are a whopping 35 different models that make up the Dark Series across hi-hats, rides, crashes, splashes, chinas and bell types. For review we have a small cross-section of this substantial line-up in the shape of 14" hi-hats, 16" and 18" crashes and 21" and 22" rides. Prices start at £165 for the smaller 16" crash and climb to £315 for the 22" ride - reasonable, but still very much in the high-end.

Each cymbal is unlathed top and bottom except for a small band around the outside edge. With the exception of the hi-hats this lathed section actually gets thinner as the cymbal sizes increase. The 22" ride for example has a 3mm band while the 16" crash is 7mm.

This unlathed finish gives each cymbal an individual earthy brown appearance. Streaks of black and large sections of darker browns make for interesting visuals and leaves no two cymbals quite the same. This raw finish allows the Dark Series cymbals to live up to their name aesthetically but should also impact the overall tone in comparison to a traditional or brilliant finish.

The baked-on patina is surprisingly smooth to the touch, particularly on the playing surfaces, which have been sanded back. The undersides are a little darker and more textured. In fact, rubbing them actually leaves black residue on our fingertips. Each cymbal is signed under the bell by the cymbalsmith and also marked with its weight in grams. The 21" and 22" rides, for example, come in at 2,220g and 2,390g respectively. Overall, the cymbals we have here for review are relatively thin and delicate, so they’re probably not the best choice for hard hitters.

All Impression cymbals are manufactured from B20 bronze using traditional casting, lathing and hammering techniques. After rolling the cast cymbal blanks to the chosen size and thickness, they are shocked in boiling water (rather than cold), which Impression suggests results in better quality bronze with superior acoustic qualities. The trade-off is that it makes the hammering process a much longer one. This labour is reflected in the surface of each cymbal of which every inch is absolutely peppered with hammer marks.

Unlike many modern dark and dry style cymbals, the Impression Dark Series manages to maintain a pleasing level of resonance, particularly when it comes to the rides. Both the 21" and 22" have a crisp stick definition. The larger sibling is more delicate, while the smaller, thicker cymbal is a little louder and produces more ping. Bells are surprisingly defined, particularly on the 22". The bell of the 21" elicits much more of the overall cymbal tone, which imbues it with greater complexity. Both cymbals crash beautifully, exploding with a wondrously low-pitched wash that isn’t at all overpowering.

The 16" and 18" crashes are a trashier pair that are more akin to the modern dry cymbals mentioned earlier; think along the lines of K Custom Special Dry or Byzance Extra Dry. The 16" is super-short and lacks complexity. For our tastes it would work much better as part of a trash stack than as a standalone crash. The 18", however, is absolutely superb. It opens up rapidly, unleashing a spiky yet musical note and disappears with a medium to short decay. Sharing similarities with an O-Zone or EFX style cymbal it unleashes quickly without being too harsh, and it feels at home in so many musical styles.

The hi-hats are particularly thin with a substantial degree of flexibility. The bottom hat is only marginally heavier than the top; this combination gives the hi-hats a soft playing feel and makes them particularly satisfying to dig into. Tonally, they are quite brash, particularly when playing into the edge. With this somewhat harsh attack it could be considered a bold move to use them as your main set. That said, they can cut through a mix like nobody’s business. It comes as a surprise, then, that the stepped hi-hat is extremely quiet - barely audible within the mix of a full kit. Even in a jazz context they lack any real definition.

Despite working well together as an overall set, the rides operate in much more versatile territory, while the hi-hats and crashes certainly feel more specialist in their nature.