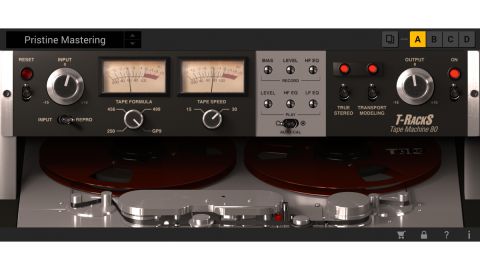 IK Multimedia has been busy building emulations of some classic European and American analogue tape machines, and the result is four processors, available individually or as part of the money-saving T-RackS bundle. They come both as individual plugins (AU/VST/AAX/ standalone) as well as modules for use in the T-RackS 5 plugin and the standalone version of T-RackS 5.

Visually, each plugin is uniquely styled and clearly inspired by the original hardware. The general feature set is largely standardised across all of them and includes the choice of Tape Formula, Tape Speed, calibration settings such as record Bias and record Level, and overall Input and Output level (+/-15dB). You can also plump for Repro mode, which includes all of the tape processing mentioned above, or choose Input mode, which only activates the input and output stages of the selected machine.

The plugins don’t get into the nitty gritty of operating levels, EQ types and so on, which is a good thing. Essentially, when you load a tape type and select a speed, simply use the AutoCal option to zero the calibration controls mentioned above. You can then use the calibration tweakers to move away from those optimum settings if you want. All plugins also include stereo channel and transport modelling features. Finally, the Reset button returns the plugin to its default settings, which in all cases is its faster tape speed coupled with 456 tape formulation.

Testing tape machine emulations can be a pretty subjective process, as the best machines only create quite subtle changes that build up over multiple tracks. Even so, these T-RackS  models do cover quite a range of machine types and tape speeds, and perhaps unsurprisingly, it’s the slower 1/4" models that sound the most coloured.

This is particularly true of Machine 440, which, at 7.5IPS, sounds quite dark, although the overall sound is certainly quite smooth. Similarly, Machine 99 is coloured at 7.5IPS, but less so than the 440, and overall, Machine 99 is pleasingly hi-fi sounding.

In terms of overall fidelity, we think Machine 24 wins hands-down, working well across multiple tracks for adding subtle sheen and harmonic richness. Our professional analogue tape expectations were best met by Machine 80, though. This delivers a wonderfully bright, enhanced sound at its higher speed. Although based on a 1/4" format, it worked really well for us across a multitracked drum kit, adding both punch and high frequency lift.

Across all machines, we found that the tape formulation had less impact than we expected. Even so, there are some differences in saturation from one to the next, and the newer higher output tapes don’t always seem to saturate less, which is intriguing.

To gain a bit more insight, we did some bench tests and discovered that all four models exhibit 3rd and 5th harmonic distortions in Repro mode, but, as you would expect, no noticeable distortions in Input mode. The harmonics generated are greater with the 250 and 456 tape types, and also at the slower tape speeds. Also, the balance between odd and even harmonics shifts as the record level changes. Nevertheless, for the most part, the end-to-end frequency responses in Repro mode seem to match our observations above.

One thing the machines don’t do is model tape noise, and this is clearly a design choice. There’s also no way to group and link multiple instances of the plugin, which really helps when emulating multitrack tape, such as a multi-miked drum kit, for example, across many DAW tracks.

For us, a couple of further useful inclusions would be reverse linking for input and output levels, and manual resizing of the windows. Also, we did notice the CPU usage stacking up when we tried the plugin across multiple tracks.

Still, the T-RackS Tape Machine Collection delivers an interesting selection of tape machines, typical tape formulations and plenty of opportunity to modify and fine tune individual settings. It’s great for everything from master bus duties to more specific and creative processing, and, although pricey, offers much better value than buying each one individually.

"It would not surprise me in the slightest if IKM Tape Machines was the most realistic emulation available today.  It certainly seems to make your CPU work harder than any of the competition to achieve the goal of realism. " Sound Bytes

"This is an excellent bundle of modelled tape machines, easy to use and with a really pleasing sound that can take you anywhere from subtle warming through to full-on classic tape wobble." Ask.Audio