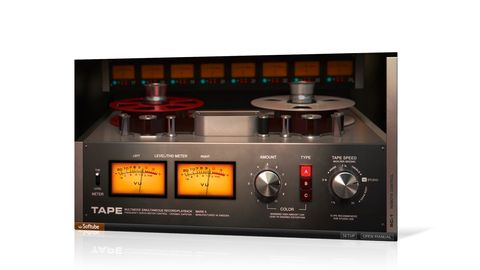 Concise and intuitive, Tape sounds absolutely superb and is surprisingly broad in its sonic scope.

Saturation-based effects have always been Softube’s bread and butter, so it was only a matter of time before it brought us a tape emulation.

Tape (VST/AU) is about as simple as this kind of thing gets, sacrificing the configuration depth of, say, u-he Satin, for a simple interface that boils the architectural minutiae of its three modelled tape machines (each complete with unspecified tape) down to a streamlined set of controls that no one’s going to have any trouble getting to grips with.

The three vintage decks in question aren’t specifically named, but A is described as “Swiss” and popular in the 60s, and therefore can only really be a Studer; B is “transformer- based” and thus, we reckon, probably the Ampex ATR102; and C is “British” - an EMI, we suppose.

Switching between them is done with the Type button, and the Amount knob increases the depth of processing - ie, tape saturation - with separate input overdrive available in the Remote Control panel (see below). Like the machines they mimic, each model has its own distinct sound: Type A is the flattest and most versatile in terms of frequency response, while Type B delivers a fairly hefty boost to the lows and highs, and Type C tilts a touch towards the top end.

Speed Stability simulates wow and flutter, dialling in wholly convincing pitch and volume wobbling, and opening Tape up to flanging and chorus effects when used in conjunction with the Dry/Wet mix knob above. High Frequency Trim boosts or attenuates treble response, rather like a shelving filter; while Crosstalk bleeds the left and right channels into each other, profoundly boosting central punch and weight at high settings.

Finally, activating Noise adds in emulated tape noise that increases in loudness and low- end emphasis as the Tape Speed is reduced, but is effectively imperceptible at high speeds; and the Run and Stop buttons trigger very cool tape start and stop effects, the lengths of which are, annoyingly, entirely dependent on the Tape Speed setting.

The Tape Speed knob steps between five settings, starting at the studio standard 30 inches per second, halving down through 15ips and 71⁄2ips, then dropping all the way to 33⁄4ips and the snail-like 17⁄8ips. As the speed decreases, the top end response rolls off, the distortion increases and the signal progressively deteriorates, from bright and smooth at 30ips to dark, lo-fi and fabulously crunchy at 17⁄8ips.

The VU meters respond smoothly and accurately to changes in Amount and Input gain, showing you exactly how hot you’re running your virtual tape, and can be flipped to THD (Total Harmonic Distortion) mode to visualise the weight of saturation being brought to bear.

Having worked the aforementioned Satin deeply into our retro production workflow some time ago, Tape had its work cut out impressing us, but we fell in love with it pretty much instantly. Satin might have the advantage in terms of power and configurability (not to mention its deployment as a delay effect), but Tape just sounds incredible - as close to the real deal as we’ve ever heard.

On the master bus at 30 or 15ips, it warms the mix and glues its component tracks together beautifully, with each Type yielding very different results; while on individual instruments and vocals, it’s ideal for subtle saturation or creative effects, thanks to the slow speeds and wet/dry flanging. Also worth mentioning is that Presonus’ Studio One DAW can load Tape as a Mix FX plugin (called Tape Multitrack), with the Crosstalk control (see boxout) bleeding discrete tracks into each other rather than just left and right channels.

A dazzlingly authentic tape emulation plugin that you’ll want to build into your template DAW project for use on just about everything (particularly if that DAW happens to be Studio One), Tape is unmissable.