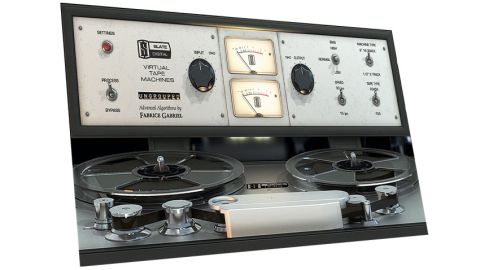 Warm and rich when tracking and mastering - VTM really does deliver the sound of tape.

If you apply the 'survival of the fittest' rule, it's no wonder that 90 per cent of today's studios are fully reliant on a computer-based recording system. It offers you infinite track counts, complete recall, automation, a degree of portability and, compared to a studio with extensive outboard gear, it's comparatively cheap.

We've certainly come a long way, then, but our recording forefathers had one huge advantage that has fallen by the wayside in our race for computer-based nirvana. Their recording medium actually had a 'sound' of its own.

While there are no time or track limits when it comes to digitally recording, there's no getting away from the fact that sonically it offers nothing. The best sounding tape machines of the '60s and '70s offered a sonic depth and warmth, irrespective of the musical styles recorded to them. Hard disk-based recordings need a lot of help in order to get them sounding less clinical.

Evidence of this quest for richness and depth is everywhere. Classic hardware preamps and vintage compressors continue to sell well to those with cash to splash, while the plug-in stage is awash with emulations of the 'units of yesteryear', offering the chance to sonically paint over digital recordings with brushstrokes of analogue warmth.

Somewhat ironically, among the most popular are emulators of the sound of tape itself. The digital revolution has come full circle: now we can enjoy all the benefits of digital recording while emulating the sound of analogue tape.

The latest in a growing list of such tape emulation plug-ins is Slate Digital's 64-bit, iLok 2-protected 'VTM' or Virtual Tape Machine.

Downloadable directly from Slate's website, this Mac and PC-compatible plug-in offers the sound of two separate tape machines and, correspondingly, the sound of two distinct approaches to the sonically rich days of tape-based recording.

The modelled machines are a 2-inch 16-track Studer A827 and a 1/2-inch 2-track Studer A80, designed to emulate the sound of classic tracking and mastering tape machines respectively. As the 'sound' of tape goes way beyond the actual choice of machine used to make recordings, it should come as no surprise that the choice of recording device represents only one of the options here.

There are also two tape formulations on offer: the classic Ampex 456 introduced in 1975, and the more modern GP9 tape which offers even greater amounts of recording headroom to allow signals to be processed at higher levels before saturation becomes audible.

These tape choices - labelled FG456 and FG9 - allow VTM to achieve two discrete sonic 'characters' within a single plug-in; whereas the FG456 option is warm, with rounded bass and smooth mid-range, the FG9 is a touch more punchy yet more 'honest' across the frequency spectrum, pulling in harshness from the top-end somewhat but otherwise managing to glue mix elements together very naturally.

Tape Speed control is offered via a 15 and 30ips (inches per second) switch, with the traditional higher noise floor of the 15ips setting giving a fatter, richer sound, albeit with more hiss. However, if the hiss factor is too great, this can be adjusted via an extended set of controls available via a dedicated Settings panel.

A time for tape

Tape emulations are certainly enjoying their moment in the sun and that's set to continue if plug-ins of the quality of VTM continue to surface.

It's easy to write it off as the perfect gimmick - a 'head chasing the tail' notion of digital recording systems using digital algorithms to artificially 'produce' the sound of yesteryear's recording technology - which was usurped for good reason.

However, not every step in the computer revolution has had a musical thrust and whereas tape recording machines were built only to record sound, computers do a range of things - audio recording is just one of them.

In that sense, computers aren't solely for recording in the way that tape was and - in the case of some studios - remains. So, any plug-in which models the sound of an era when recording technology was for recording alone can only be a step in the right direction, while a plug-in that models that sound as well as VTM represents several more steps further.

Whether you want to add VTM to each track of your mix to emulate a full tape-based session, or simply emulate the sound of tape-based mastering, it's all here. Following on from last year's VCC, VTM is another hit for Steven Slate.