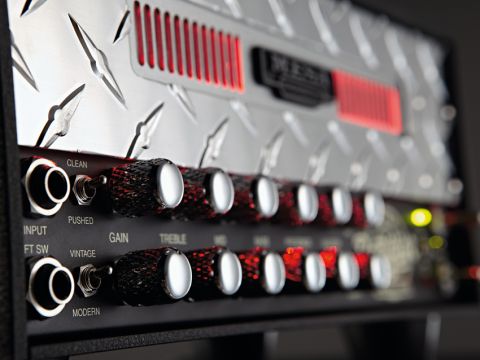 All together now - aww, isn't it adorable! Well yes it is; measuring just over a foot across Mesa's all-new Mini Rectifier looks at first like it might be one of those scale models you see in big boy's toyshops.

Far from some mantelpiece memento, however, it is in fact a living, breathing, all-valve head. The baby of the bunch it may be (it has 50-, 100- and 150-watt brothers), but the Mini Rectifier has a pair of EL84-driven lungs that will happily shout down the house, small bar or club.

So, should you be someone with a penchant for the brand itself, or indeed for the heavier end of guitar music in general, you will doubtless now be asking this question: is this a gimmicky toy, or could it finally solve my big amp/small amp woes?

The Mini Rec is housed in a black powder-coated metal lunchbox-style case, lightly textured for an industrial feel. The top handle recesses should you want it to, or pokes up and out through the included padded gigbag for easy transport.

And boy is it easy - this amp would happily fit in some players' leads/pedals bag! Airline hand luggage? Size and weight wise at least (5.5kg), there's no problem at all.

The Rectifier's now-legendary truck-ramp metal plate texture adorns most of the front panel, through which you can see a menacing red glow when powered up: rock.

Despite the tiny size, the Mini Rec features two independent channels, each with two modes, offering everything from Fender-derived cleans, through more British crunches, heavily saturated classic rock distortion and modern metal crunching high-gain. Channels one and two are footswitchable, but the modes need to be set via mini switches on the front panel.

In addition, each channel has a choice of either 10- or 25-watt operation. The lower power mode, according to Mesa, runs the Mini Rectifier's pair of EL84 output valves in class A/B triode mode, while 25 watts uses Mesa's patented Dyna-Watt circuit, class A/B pentode, for maximum power and more pronounced attack with notes. Completed with two rows of identical, self-explanatory control knobs, there's nothing here to confuse you.

As with Mesa's other mini head, the TA-15, there's no reverb. Okay, many rock/metal players tend not to like springy ambience, and it's not on the bigger Rectifiers either.

Add to that the fact you couldn't physically get a full spring reverb tank in the chassis and you can see why it's not there. You do get a hard-bypassable series effects loop, however, so you could put a reverb unit there, or indeed any other effects box or processor.

And what about that cabinet? Shaped like a Recto 412 but in miniature, it houses a single Celestion Vintage 30 driver.

It's not something either party publicises but Mesa is fastidious about its V30s and has continuously worked with Celestion to get the spec and consistency it needs, which is to politely say that not all V30s have been created equal over the years.

Like its speakers, Mesa also takes cabinet design extremely seriously and a quick A/B with another 1 x 12 explains why immediately in terms of volume, tone and projection. Do make sure that you try one alongside the lesser cab on which you were thinking of economising.

Inside the head, its Mesa business as usual. The Mini Rectifier is designed and made around a custom PCB design, the only real questions surrounding just how Mesa crammed it all in there - this is far from a simple circuit.

It's very easy to trip off the words 'two-channels with four modes', but the reality is that each of these modes is radically different. On power-up there is a small but noticeable hum; not enough to upset a recording (and certainly not a rehearsal or gig), but potentially enough to annoy home players at super-low volumes.

Channel one clean has a very Fender-like response with a goodly dollop of high end presence and full, extended bass. You could happily twang out Sultans Of Swing here with a Strat, or get into funky choppy rhythms.

If it lacks anything, it's the air and space of an open-backed cabinet and, of course, reverb. The clean mode will overdrive if you push the gain pot - most satisfying in the more elastic-feeling 10-watt mode - but much better for that in our opinion is the next mode.

'Pushed' immediately ups the signal's gain for a much stronger, more urgent tone. Cleans are punchier here, but it's when you head on into more crunchy low-gain rock and pop rhythm tones that it gets really exciting.

With a Telecaster for example, and in 25-watt mode, the combined thump and sizzle from open-position chords is a sound you've heard on countless records from the Stones to the Georgia Satellites.

Flicking down to 10 watts smooths out the dynamics, compressing on the note attack and blooming more as they sustain - if you like the way 50-watt Marshalls react when cranked, you'll recognise some of that here, albeit at much more manageable volume levels. If you're adept with mic'ing, that becomes an absolute godsend for recording.

And so it goes with channel two's 'vintage' mode. It's a bit of a misnomer unless by 'vintage' you mean a heavily modded classic rock head, fat, saturated and with a plenty of loose bottom-end resonance.

It's just lovely for late '70s/'80s rock riffing and solos - humbucker-loaded Strat with a maple fretboard and a Floyd, anyone?

Or perhaps knock back the gain and bass, and let a Les Paul push those mids in a heavier Gary Moore or southern rock direction. Now the closed-back cab's tightness and direct projection becomes a real boon.

The final mode, 'modern', gets much closer to what people associate with the Rectifier name. More presence, a tighter bottom-end response and more cutting mid-range brings the rock tones into the nineties and beyond, where the overall more focused sound handles crushing gain levels and down-tuning in a way the older amps never could.

The Dyna-Watt circuit is a real bonus here. Despite the 25-watt rating, the way the Mini Rectifier handles its playing dynamics means that, while it's obviously not able to out-shout a 50- or 100-watt Dual Rectifier, it will surprise you with its volume, poise and sheer size of sound, even through that single 1 x 12 cab.

At this price, the Mini Rectifier has a hard road ahead. On the one hand, how many rock guitar player's egos will allow them to even countenance spending over a grand on such a tiny box and 'only' 25 watts… plus the cabinet, of course?

On the other, how many of us are fed up with carrying around huge, heavy amps that fewer and fewer venues will allow us to crank up?

Therein lies the Mini Rectifier's raison d'être: because in any real-world playing situation where a 50- or 100-watt valve amp is just too much, this little box does a thoroughly convincing job for all rock styles. It lacks reverb, and the omission of a speaker-emulated direct out feels like an oversight, but if what you seek is a go-anywhere, no-fuss rock amp for small gigs, the Mini Rectifier absolutely fits the bill.