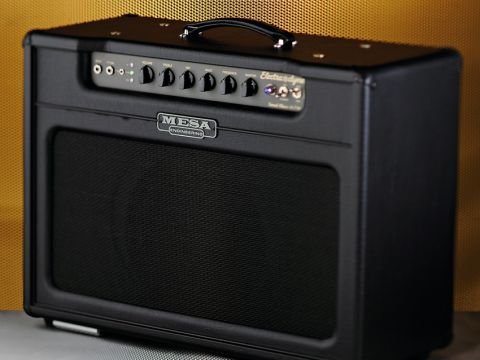 A superbly simple to use, yet versatile and great sounding workhorse for rock 'n' roll, blues and classic rock.

The last Mesa with just six knobs was the seminal Mark I, introduced way back in 1972. Since then the Californian company has proudly packed its amps with features to give we guitarists ever more flexibility. Alas, many of us are simple creatures and frequently bemoan 'over-complication': can't we just plug in and go? Welcome the Electra Dyne, then, a Boogie-shaped gauntlet for even the most the pot and switch-phobic.

The Electra Dyne's aesthetics have a welcoming old-school vibe, courtesy of the curved edges of the roomy 1 x 12 cabinet's cut-outs, the logo typeface and fifties cooker-style knobs. It's all in keeping with the simple-to-use ethos for which Boogie deserves big praise, not least because what's happening inside is anything but simple…

"It offers a wide range of classic American-voiced cleans and Brit-inspired drives that span the gamut of tones from surf to shred."

In the following video demo, we've referred to the Electra Dyne as a two-channel amp. Boogie bills it as single-channel with three modes, however, even though it has separate circuits and valves for the modes. You have three sounds at your feet: clean, vintage low and vintage hi. After that you get single treble, middle, bass and presence controls, which may suggest a settings compromise between modes, but they're in fact stacked pots, optimised specifically for each mode. Check it out:

One issue with having clean and dirty sounds on one set of controls is balancing their respective attacks and volumes. Most modern amps have at least some independent controls to combat this, but in the spirit of simplicity, Mesa has come up with two excellent new features.

The second is a three-way toggle called 'gain trim'. This adds more flexibility to your front-end gain by regulating the drive down in either clean or vintage hi/low modes. So for example, if you want to run a fairly high level of front-end gain in the clean channel, but don't want the dirty modes to scream too much, set the gain trim to 'hi/low' where it'll trim the gain back in vintage hi/low modes.

Conversely, if you want a very gainy sound in vintage hi/low, but you want to keep the clean mode clean, set the switch to 'clean'. You might wonder why Mesa hasn't just included separate gain and master controls for each mode. One answer is that these are set-and-forget controls that you don't need to alter. More usefully, the sounds really don't feel compromised at all, which is testament to Mesa's doubtless extensive R&D with pot values, tapers and so on: it just works.

While we're around the back, it's worth noting that the slave output for driving other amps, the switchable 4/8-ohm speaker outs, the bias switch enabling you to use either 6L6 or EL34 valves and the simple series effects loop. The latter is completely hard-bypassed when not in use. When it is in use, it's best paired with serious quality processors and professional, line-level rack gear - 'normal' pedals are better off in the front end.

You can go from reverb-drenched, blooming-bottom Fender-derived cleans, to tight and punchy no-reverb crunch with one tap of the footswitch. If reverb isn't your thing, there's a hard bypass option including its driver valve and circuitry.

The whole amp is switchable between 45 watts (two 6L6s, class A) and 90 watts (four 6L6s, using Mesa's trademark Simul-Class that blends class A and class A/B circuitry); the latter altogether bigger and bolder with more clean headroom, more of which later.

Inside the chassis we find Mesa's usual, custom-designed circuit boards with everything laid out neatly. From the silk-screened decals to the powder-coated steel chassis and securely fastened metal jacks, it's clear that this, like the vast majority of Mesa/Boogie amps, is built to be thrashed. We've heard some independent techs bemoan their 'complicated' construction when it comes to repairs, but personal experience tells us they break down far less frequently than more run-of-the-mill amps.

The Electra Dyne's clean mode has acres of clean spank, good deep bass after two o'clock - even from the 1 x 12 format - and sparkling trebles, especially in the full-power, 90-watt setting, which lends almost a Vox-like character to the otherwise Fendery-response.

With single-coils there's a bright, shimmering, latter day Hank Marvin-style sparkle in the lower ranges, which benefits hugely from that expansive, sweet sounding spring reverb. Winding up the volume control takes us more into classic Blackface Fender territory, while moving on with humbuckers brings a satisfying vintage-style overdrive past two o'clock, the whole thing darkening to tame the wiriness that the extra gain brings.

The elasticity and compression in the drive is accentuated when you push the master, lower the clean level pot on the back and run it at 45 watts: it's a dynamic, feel type of thing that will be every bit as important to you as the tone itself.

The vintage low mode ups the gain, and tightens the tone all over so that things stay well defined and together, even with a Les Paul. The overdrive range is wide - lighter classic rock rhythm sounds somewhere near AC/DC territory, through to fuller-gained lead sounds like a really well sorted master volume Marshall, albeit with more of Boogie's punching midrange and bottom-end clout courtesy of those 6L6s.

This is probably our favourite mode for all round appeal - during our tests we did a whole set in this channel alone, cranked, just using the volume and tone controls on a Strat and Les Paul to regulate a whole plethora of drives and textures.

The vintage hi mode brings to mind a more modded-Marshall vibe, albeit again with Mesa's more commanding grip of the mid-range focus and low-end. The highs are powerful to ensure definition and cut with all the extra gain and, as such, single-coils can sound wiry. In the lower ranges, this is a fat-sounding clean chording tone - fatter than vintage low - then as you add more gain you go through a classic old-school rock lead to a more squashy, rich, saturated distortion.

Despite the Brit inspiration, there's plenty of cutting high mid-range here to satisfy more modern-minded technicians, though on the end of a Les Paul, you can imagine it keeping the Doug Aldriches of the world happy: a fat but cutting lead tone packed with harmonics.

Overall, the single rear-mounted Mesa/Celestion MC90 speaker - in addition to the largely, though not completely, enclosed cabinet - ensures noticeably punchy projection, with makes-you-blink sound pressure levels for loud clean tones, and hits-you-in-the-chest crunch tones. You'll have absolutely no trouble being heard with this.

So has Mesa/Boogie gone retro? From the Electra Dyne's simple front panel and ease of use you might think so, but the way the amp works is anything but vintage. To this reviewer it feels not unlike a stripped-down Lone Star, in that it offers a wide range of classic American-voiced cleans, and Brit-inspired drives, that span the gamut of tones from surf to shred.

More useful, perhaps, is that it covers the ground in between comprehensively, making it a fine choice for that serious rock 'n' roll workhorse that's been eluding you all this time. It is expensive on the face of it, though significantly less so than many imported American high-end amps, so if you're earning from playing, it's a fair investment. More powerful than the Express 5:50, not as involved as the Lone Star and simpler than either: we like it a whole lot.